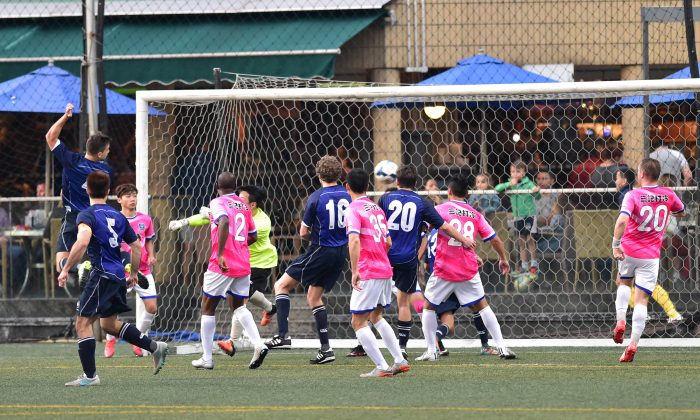 Lucky Mile (Blue) score with a fine angle header in their HKFA division 1 match at Sports Road on Sunday Feb 28, 2016, but Tai Chung were too good on the day, coming away with a 3-1 win. (Bill Cox/Epoch Times)
HK Football

On Saturday (Feb 27), Eastern took on Dreams Metro Gallery at Sham Shui Po Sports Ground, extending their lead at the top of the table with a 4-nil victory. Eastern opened the scoring in the 17th minute when Clayton Afonso headed in from Xu Deshuai’s cross, and extended their lead in the 52nd minute when Michel Lugo headed in another Xu Deshuai cross. Andy Naegelein added a third in the 88th minute when hitting the rebound after Giovane Da Silva’s shot was blocked, and Michel Lugo added the fourth in the 89th minute.

In Sunday’s game at Mongkok Stadium, Kitchee took the lead against BC Rangers in the 16th minute when Rufino Sgovia scored the resultant penalty after he was brought down. BC Rangers equalised in the 72nd minute when Mauricio Da Luz scored from Cheung Siu-kwan’s free kick, though Alexander Akande scored the winner for Kitchee in the 81st minute when he headed in Matthew Lam’s cross for a 2-1 win.

Central & Western lead the table with 52 points from 19 matches, with Hoi King second with 51 points from the same number of games.

In the first division GAS were 3-nil winners against The Store House Squadron, Wanderers were 6-nil victors over HKDC Mobsters, Baker Tilly Spartans won 1-nil against Colts, and USRC were 4-3 victors over Swiss XI.

In the second division, French Kiss won 1-nil against University, Boca Seniors drew 2-all with WYFC06, Colloids FC were 2-1 winners against IES, and GGFC were 1-nil victors over Antonhill.

French kiss lead the table with 37 points from 16 matches, with KCC Knights second with 31 points from 14 matches.

In the third division, Dynamo were 4-nil victors over HOB, HKUSA were 5-2 winners against Goial Visio, Green Cypress FC won 2-nil against CAPS, and ANP were 1-nil winners against Yan Po.
Dynamo lead the division with 40 points from 17 matches, ANP second with 39 points from the same matches.

In the fourth division, WYFC84 were 2-1 victors over Bapcoll, Darts drew 1-all with Outward Bound, and Maccabi HK were 5-nil victors over Scorpions.

Maccabi HK lead the division with 46 points from 17 matches, with Friends of Barclays second with 39 points from 16 matches.