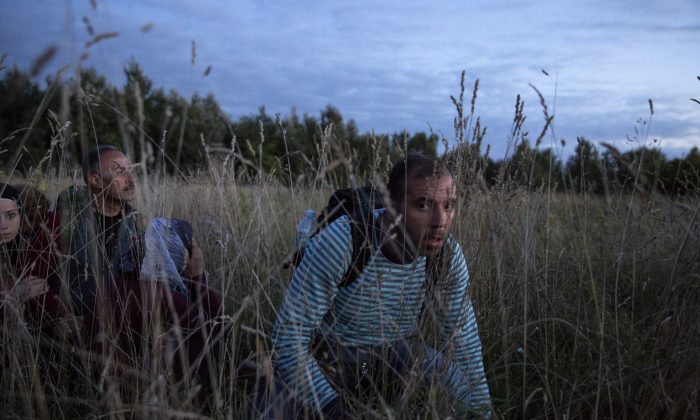 Refugees are smuggled through fields and forests in an attempt to evade the Hungarian police close to the Serbian border on September 8, 2015 in Roszke, Hungary. (Dan Kitwood/Getty Images)
Europe

BRUSSELS—The tens of thousands of refugees rushing razor-wire borders or cramming into Germany-bound buses and trains have laid bare the weaknesses in the European Union’s migration policy and exposed a deep East–West rift tearing at EU unity.

Despite the scale of the refugee emergency, many Eastern European and Baltic nations—former Soviet satellites with less multicultural experience and economic prowess than their fellow Western European countries—viscerally oppose being told to host migrants and refugees on their soil.

Their position is in stark contrast with that of Germany and Austria, which have opened their borders to thousands of migrants in recent days.

On Wednesday, European Commission President Jean-Claude Juncker will step up his efforts to get a faster response from the bloc’s 28 member nations, unveiling a plan to fairly distribute more than 120,000 people fleeing conflict zones like Syria.

That is unlikely to get cooperation from countries like the Czech Republic, Slovakia, Hungary, and Poland. In a joint statement last week, the four said they would not accept any mandatory or permanent quotas to take in migrants.

They have already rejected a previous EU attempt to share 40,000 refugees, only a fraction of what Juncker is seeking now.

“We are willing to be part of the solution. But not as an arbitrary decision by some bureaucrat.
— Miroslav Lajcak, foreign minister, Slovakia

“We are willing to be part of the solution,” said Slovakia’s foreign minister, Miroslav Lajcak, on Saturday. “But not as an arbitrary decision by some bureaucrat,” he said, referring to policy makers at Juncker’s Commission.

Slovakia accepted around 100 refugees last year, about a third of those who applied, and the issue is a political hot potato with elections due in March.

Some dread the integration of newly arrived Muslims into their mostly Catholic society. “We have no mosques or structures for them. This could lead to more radicalization,” one government official said, on condition that he isn’t named while talks on the refugee plan continue.

In Hungary, Prime Minister Viktor Orban has built a razor wire-topped fence on his southern border to keep out migrants, and blamed Germany’s decision to welcome more Syrian refugees for his country’s security problems.

On Tuesday, officials from the U.N. High Commissioner for Refugees warned that Hungary faces a bigger wave of 42,000 asylum seekers in the next 10 days and will need international help to provide shelter on its border with Serbia. The U.N. agency said it was sending tents, beds, and thermal blankets.

Almost all of those passing through Hungary are hoping to reach Germany or other Western European countries with generous welfare benefits and open asylum regulations. Almost none wish to remain in Hungary, which is seen as unwelcoming to asylum-seekers and which does not have the same economic opportunities as much richer Germany.

The EU estimates that two out of every three migrants arrive from conflict areas and could qualify for asylum or some form of protection. That carries important legal obligations because of international laws obliging countries to protect refugees.

If Europe continues these policies, then tens of millions of people will arrive at the borders.
— Viktor Orban, prime minister, Hungary

Until now, EU institutions have focused on tightening loopholes in Europe’s asylum laws and sending funds to countries hardest hit.

The resources of the EU’s border agency were trebled, and a naval operation was launched to tackle smuggling in the Mediterranean, where almost 3,000 people, mostly from Africa, have drowned trying to set foot on European soil.

Immigration officers have also been sent to Africa to assess who might be eligible to be sheltered in Europe, and weed out those who are just looking for jobs.

It’s a laudable approach, but not one that can respond to a humanitarian crisis. On top of that, member states—both the rich Western ones or their poorer Eastern neighbors—can easily change their stance on migration with the winds of popular opinion or a downturn in the economy.

In times of high unemployment, it’s difficult for a government to justify opening the doors to migrants who will have to be fed and sheltered and eventually look for work.

“We are now experiencing one of the most classical political dilemmas. That is, a conflict between the protection of our borders and solidarity toward the refugees,” European Council President Donald Tusk said on Monday.

It is a dilemma that Juncker’s proposals will face.

Ahead of Wednesday’s announcement, France said it would take in 24,000 people needing protection—a clear endorsement of the scheme.

Britain, which will not take part, announced that it would take in up to 20,000 refugees from outside Europe over five years.

But this approach still has its opponents in the East.

“If Europe continues these policies, then tens of millions of people will arrive at the borders,” Orban said.