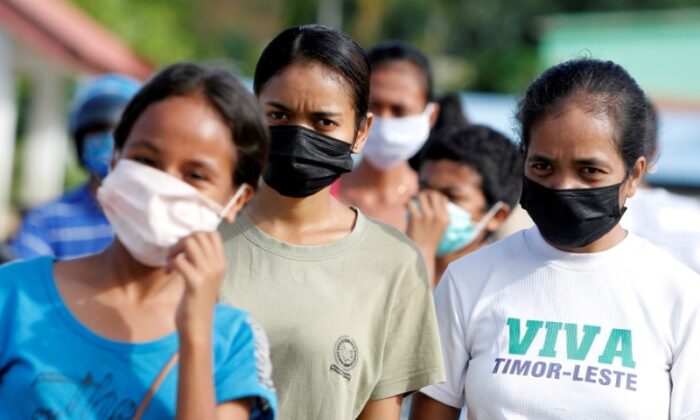 Women wearing protective masks look on as they walk on a street after the government announced new cases of COVID-19 in Dili, East Timor, on April 16, 2020. (Lirio da Fonseca/File Photo/Reuters)
Asia & Pacific

East Timor has recorded its first case of community transmission of the Delta variant of the coronavirus, raising concerns by its health ministry about a possible spike.

Genomic sequencing by Australia’s Doherty Institute in the first week of August found that of 27 samples taken in the country’s Ermera region from people infected with the coronavirus, 12 were of the Delta variant.

Ermera has the highest number of active cases and lowest vaccination rate in East Timor, which borders Indonesia.

The health ministry in its Aug. 8 report said Delta variant transmission “is likely to cause a significant increase in case numbers, including severe cases and deaths.”

Home to 1.3 million people, the Southeast Asian nation has recorded just 11,579 cases and 28 deaths since the start of the pandemic.

About 8.5 percent of its 1.3 million people have been fully inoculated so far, using the vaccines of AstraZeneca and Sinovac.

Samples from other regions have yet to be tested but public health experts said growing case numbers elsewhere in the country could indicate that Delta was also present there.

Danina Coelho, the government’s spokesperson on COVID-19 vaccines, said the Ermera cluster showed how critical it was to boost vaccine coverage.

“The government is very concerned about those cases specifically as the rate of vaccination is very low,” she said,

“That’s why the government is reinforcing the vaccine campaign.”