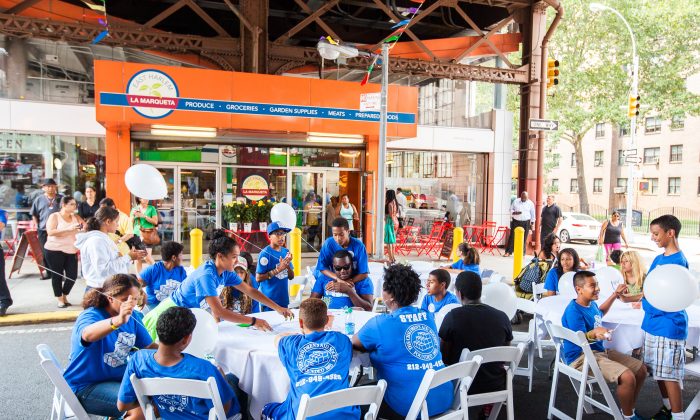 NEW YORK—It wasn’t an easy Thursday opening speech for City Council Speaker Melissa Mark-Viverito. While introducing, recognizing, and thanking all the parties involved in reviving a Harlem landmark La Marqueta, she was muted multiple times, as Metro-North train units roared over her head.

However, the trains were not a nuisance for Maria Pacheco, 73, standing in the audience. In fact the deafening noise moved her almost to tears, bringing back childhood memories.

Pacheco was seven when her family moved from Puerto Rico to East Harlem, N.Y. While living on 118th St., they used to shop at La Marqueta, a long strip of vendors under the Metro-North tracks on Park Avenue. “It was from 111th all the way [to 116th St.],” she said, pointing far south while standing on the corner of 116th St.—that’s where the fish market used to be.

“Around the corner there was a store where I bought my fancy party dresses,” she remembered. “And on this side,” she continued, “was the housewares, clothing;” she got interrupted by another train.

La Marqueta came to be in the 1920s, as cart vendors began congregating at the conveniently sheltered spot. In 1936 Mayor Fiorello La Guardia made the market official, renting stalls to vendors in five new buildings that replaced what was “formerly a maze of pushcarts,” a period New York Times article states.

By the 1960s the market was “a retail super-hub of El Barrio–East Harlem,” as Mark-Viverito put it, with about 500 vendors squeezed in with crowds of customers under the tracks.

But much has changed since then. Steady decline since the 1970s left four of the buildings derelict or outright destroyed and the last building housed a meager four businesses in the late 2000s.

Now, for the first time in 50 years, there is hope. City Council pumped $1.5 million into the last La Marqueta building renovation. It opened in 2011, housing close to a dozen vendors, including Hot Bread Kitchen bakery, which offers job training for immigrant minority women in culinary arts.

Not only does Hot Bread Kitchen bake its own variety of ethnic pastries, but it also rents the kitchen—sometimes for subsidized prices—to 42 culinary start-ups, according to its Communications Manager Grace Moore.

Next year, the Council is adding $3 million more for renovations to make the space usable for restaurants and other more demanding businesses.

A month ago GrowNYC opened a youth market in the plaza staffed by youngsters between 16 and 24. They sell New York-grown fruit and vegetables of the quality a customer is used to getting from other farmer’s markets in Union Square and Upper West Side.

Right across from the vegetables, the Flying Pigs Farm opened a meat stall with packaged bits of meat from its pasture-raised, rare-breed pigs—that is “all the varieties of pigs that haven’t had all the fat and flavor bred out of them,” farmer and owner Michael Yezzi said.

Seeing the place alive again, has brought the locals back, undeterred by the rush hour train traffic. Pacheco, for one, is glad for the re-born La Marqueta, even if only a fraction of its former glory.