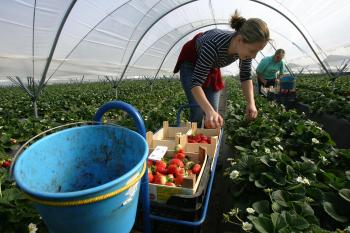 Ekaterina Popova
View profile
Follow
biggersmaller
Print
A high percentage of migrant workers from emerging Eastern European countries who had fled their homes in pursuit of better live after the collapse of the communist regimes in 1989 will return home from making their living abroad to escape the ongoing economic woes, a recent study shows.

Europe is seriously affected by the financial crisis which is set to become the worst nightmare for foreign workers exposed more than ever to layoffs and job cuts rather than to the once-much-more-profitable job markets.

During the past few weeks, the immigrant workforce in the fields of construction and consumer services were packing up and leaving in flocks, heading back home departing richer nations such as the United Kingdom, Spain, and Italy even though some have labored in these countries for more than a decade, according to an International Immigration consultant firm Migration Expert study based on data from Britain’s Ministry of the Interior.

The ongoing financial gloom and doom in the Eurozone, and the latest numbers, underscore a grim trend that the number of foreign seekers for jobs has fallen to its lowest point since 2005.

The study also revealed that during the period from the month of January until March this year, only 45,000 applications were submitted by citizens of the eight emerging Eastern European countries that joined the European Union in 2004, a 13 percent smaller number in comparison to the same period last year.

Migration Expert urges the small companies in the U.K. to retain their most experienced personnel in times when the shortage of qualified workers in the country increasingly grows, even though the world’s recession has began to cripple economic development. Moreover, specialists in the health sector, engineers, social workers, and consumer services are among the jobs that the richer countries such as the U.K. need to fill in with the help from abroad, the firm said.

The British employers predict severe recession, which has begun to creep in now. The British economy will drop to the bottom in the end of 2009, and the unemployment is projected to affect 3 million people. According to a report by the biggest British employers’ union—the Confederation of Britain Industry (CBI)—the recession that Britain will experience will be as harsh as the one in 1991. The CBI study reports that the biggest decline in the U.K. is in the tourism industry, but the study also indicates surprising decline in trade in the sectors of marketing services, real estate, and human resources.

In Bulgaria—a post-communist country that has recently become a member of the European Union—one study shows that around 20 percent of the country’s vast immigrant force will return back to its origin and experts fear the mayhem may trigger a chain reaction within the Eurozone itself. The study is one of the first ordered by Bulgaria after the “transition period,” as Bulgarians call the time of the fall of communism. According to the statistics, this is about 300,000 people, since the total number of immigrants from the country is 1.5 million. This year, only 8 percent of the people of the age of 18 to 35 is willing to immigrate out of the country as compared to last year, when the percentage was twice as high.

In Spain alone there are 150,000 Bulgarian immigrant workers, based on official data form the Ministry of Labor and Social policy. The Ministry organized a labor exchange for the Bulgarians in Spain last week. Along with Bulgarian employers, the Bulgarian authorities tried to convince their compatriots to return to their country. Bulgaria suffers from a severe shortage of qualified workers. The unemployment rate in the country is among the lowest in Europe—around 6 percent, compared to the average unemployment rate of 7.2 percent in Europe. In the unemployment offices in Bulgaria primarily there are registered people from the Romani ethnicity, and people who lack education. The authorities organize training courses; most of the people can become tailors or general workers.

The unemployment in Spain reached 12 percent and the country is in recession. According to preliminary data form the government, the crisis will affect from 2.7 to 3 million people. The most affected will be the sectors of construction, agriculture, and services.

The situation is similar with the Bulgarians in Italy. Highly experienced contract workers return and seek opportunities in the major construction sites in Bulgaria. According to Bulgarian labor union experts, the Bulgarians who work for years in Spain and Italy have the greatest chances of finding work in their homeland, since the world’s financial crisis is apparent everywhere in Europe, which significantly limits the labor markets in general.

According to the labor syndicate experts, this process of return could have a positive effect on the Bulgarian labor market by increasing the competition and productivity of labor. However, it is unrealistic to think that there will be an increase of wages in Bulgaria, according to experts. The return of Bulgarians will decrease the flow of capital from outside of the country, and it will have a positive impact on the social spending in the country, according to experts.

For the past 5 years, 40,000 nurses left Bulgaria. Their wage is 200–300 euros (US$250–380) a month for their highly specialized and responsible duty. An official agreement allows Bulgarian nurses to work in Germany for 1,800–2,000 euros (US$2,270–2,500) and provided accommodation. Many of the nurses work in the EU as caregivers to elderly people. They are well-paid and are able to support their families.

In comparison, Bulgaria feels strongly the shortage of doctors, engineers, foreign language teachers, scholars in all spheres of science, and is in need of experts in many other professions.