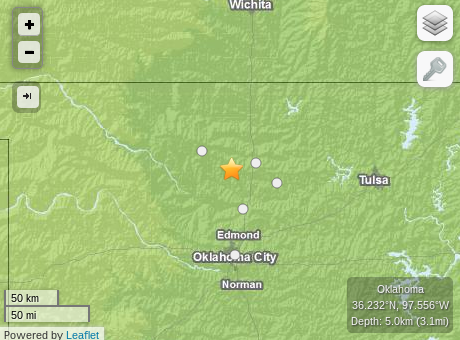 An earthquake hit today in Oklahoma in the Oklahoma City metro area.

The quake struck just after 10 p.m. on Monday, about 15 miles west-southwest from Perry, 21 miles east-southeast of Enid, and 25 miles north-northwest of Guthrie.

The 4.1 magnitude quake also hit about 29 miles west-northwest of Stillwater and 52 miles north of Oklahoma City.

It was recorded by the U.S Geological Survey at a depth of 3.1 miles.

Though the quake was felt widely, there have been no reports of major damage.

A 2.7 magnitude aftershock later hit in the same area.

“Since when did Oklahoma become the earthquake capital of the US?” said one.

“It’s just a matter of time before Oklahoma has ‘the big one.’ They keep getting bigger. #earthquake #fracking,” added yet another.