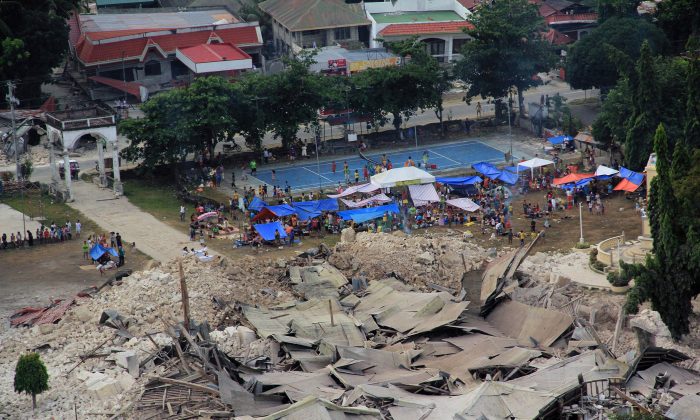 Residents living in tents beside the rubbles of the Our Lady of Light Catholic church after a powerful earthquake struck Loon town, Bohol province, central Philippines Wednesday Oct. 16, 2013. The 7.2-magnitude earthquake that struck the central Philippines and killed more than a hundred people also dealt a serious blow to the region's historical and religious legacy by heavily damaging a dozen or more churches, some of them hundreds of years old. (AP Photo/ Philippine Air Force)
Asia & Pacific

A 7.2 magnitude earthquake hit the Philippines on Oct. 15, followed quickly by a 5.4 aftershock and more than 2,100 other aftershocks. The death toll increased to 186 as of the morning of Oct 20.

The temblor struck about 56 kilometers (35 miles) deep below Carmen town on Bohol Island but did not cause a tsunami in the seas around the archipelago.

Of the 186 fatalities, the National Disaster Risk Reduction and Management Council said 173 were from Bohol while 12 were from Cebu, reported the Sun-Star. One was from Siquijor.

At least 11 remain missing, all from Bohol, it added. More than 374 people were injured from the quake.

Because of continuing aftershocks, classes in almost all of Cebu Province, Philippines are canceled until Nov. 4.

Dozens of roads and bridges were damaged or completely destroyed, while historic churches dating from the Spanish colonial period suffered the most. Among them was the country’s oldest, the 16th-century Basilica of the Holy Child in Cebu, which lost its bell tower.

Extensive damage also hit densely populated Cebu city, across a narrow strait from Bohol, causing deaths when a building in the port and the roof of a market area collapsed.

Over 3.4 million people have been impacted by the earthquake so far.

Impact of Quake and Aftershocks on People

The quake set off two stampedes in nearby cities. When it struck, people gathered in a gym in Cebu rushed outside in a panic, crushing five people to death and injuring eight others, said Neil Sanchez, provincial disaster management officer.

“When the shaking stopped, I ran to the street and there I saw several injured people. Some were saying their church has collapsed,” she said.

But the quake, which hit for about 30 seconds, was centered inland and did not cause a tsunami.

The 7.2 quake hit around 8:10 a.m. local time. Cebu City, the largest city near the quake at almost 800,000 residents, suffered “strong” shaking, according to the USGS.

At least a dozen aftershocks following the quake registered above 4.8 magnitude.

The US Geological Survey later downgraded the first earthquake to a 7.1, but the Philippine Institute Of Volcanology And Seismology (Phivolcs) has it as 7.2.