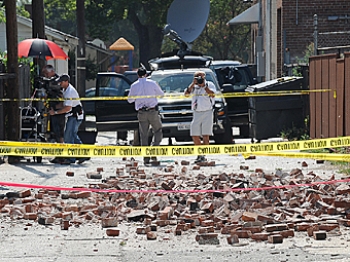 A minor earthquake shook Southern California on Tuesday, with minimal structural damage, and no reported injuries.

Other than saturated phone lines and a few public building evacuated as a precaution, life went on as usual in the Golden State.

The epicenter of the earthquake was three miles west-southwest of Chino Hills, California and 28 miles south-southeast of the Los Angeles Civic Center, the USGS said.

Minor damage was reported in Chino, but according to residents, some of the biggest issues faced were phone lines flooded with calls, which made it nearly impossible to make cell phone or land-line calls for close to 45 minutes.

Following the main earthquake, about 50 aftershocks rolled through the city.

Initially, the quake was estimated to be a 5.8, but it was eventually pegged at 5.4.

The survey originally judged that the quake was “moderate,” meaning that it could cause minor damages to surrounding buildings, but was later brought down to “minor” status.

California is earthquake-prone due to the convergence of several continental plates in the state.

The areas of convergence create “fault lines,” and the slipping of plates past each other periodically generate earthquakes of varying intensity along the fault lines.

According to a press release from the Los Angeles County Office of Emergency Management, the LA Department of Water and Power reported that 24 customers were without electricity mid-afternoon.