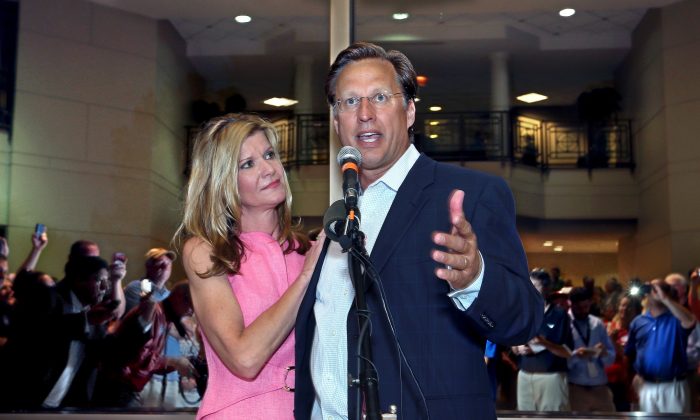 The gobsmacking part of House Majority Leader Eric Cantor’s surprise loss to a tea party challenger in Virginia’s primary Tuesday is this: Cantor is far from being a moderate. He is a flint-eyed, uncompromising conservative.

But not flint-eyed enough. Cantor was willing to discuss immigration reform, or as Breitbart.com refers to it, “amnesty.”

He also spoke against the idea of shutting down the government in 2013. But he criticized House Speaker John Boehner for being not conservative enough.

Cantor’s primary opponent was David Brat, a Randolph–Macon economics professor making his first run for office in an underfunded campaign that benefited from the support of tea party groups.

Brat campaigned as a foe of immigration legislation, and said Cantor was likely to help immigrants living in the United States illegally gain amnesty if given a new term in the House. Virginia’s 7th Congressional District is solidly Republican, and Brat is likely to be elected to Congress.

That Brat won by campaigning against Cantor’s meager willingness to consider immigration reform will have a chilling effect. Even though Republican President Ronald Reagan signed immigration reform that offered certain undocumented immigrants amnesty, the idea has become anathema to some conservatives.

During a 1984 presidential campaign debate, Reagan said, “I believe in the idea of amnesty for those who have put down roots and lived here, even though sometime back they may have entered illegally.”

Reagan’s support for amnesty was conditioned on a promise that the border would be secured, preventing any future large-scale influx of illegal immigration. Congress failed to follow through.

Some opponents, like Brat, discuss amnesty as though it were always illegitimate.

Cantor said in a press conference Wednesday, “My position on immigration reform did not change. I have always said the system is broken and needs reform.” He said he preferred to reach agreement small step by small step, as opposed to President Obama’s approach of ‘my way or the highway.’”

Cantor is resigning as House Majority Leader, effective July 31. He sounded gracious and engaged as he faced reporters Wednesday. He said he had a lot of work to do before he leaves the House, and that he will seek ways to serve in the future.

A reporter said some described him as too uncompromising and others as too compromising. He said, “Maybe we had it right somewhere in the middle.”

Erick Erickson of the Red State blog said Cantor lost because he was poor at constituent services. It’s true that the most inept denizen of Washington can stay in office if he takes good care of his voters. But it may be something else.

Cantor’s sudden change in fortune has to do with a national change that has strengthened the partisan divide.

Both Donkeys and Elephants naturally try to redraw districts in a way that will allow their candidates to be reelected. The ultimate prize is a fully safe district—one so blue or so red that no one from the other party has a chance to be elected. Virginia’s 7th seems to be that kind of district. A terrible consequence of safe districts is that they remove any motivation to compromise.

Historically, third parties in American life passionately pursue an issue, like abolition, women’s suffrage, or prohibition. Then the dominant parties enfold the issue into their respective platforms. Then mainstream candidates get elected, work with people from the other party and develop new policies and laws. Though the tea party is not technically a third party, it acts as one, championing certain issues.

But tea party figures from safe districts have no motive to compromise. They are moving the Republican Party further and further to the right. Incumbents who want to work with Democrats or with the president may look at Cantor’s fate and think twice.

At the same time, Democrats from safe districts also have no incentive to compromise and see championing amnesty as a way to solidify their hold on the Hispanic vote.

After the Cantor upset, the Democratic Party was quick to send an email soliciting donations, which read in part:
“Eric Cantor did everything he could to fight ‘Obamacare.’ Tried to turn Medicare into a voucher program. And blocked immigration reform. But he still wasn’t conservative enough for the TEA PARTY.”

Then it asks for a little tiny donation, $3. Not for support for Brat’s Democratic opponent. He is not named.

He is Jack Trammell, and he announced his candidacy on his new Facebook page on June 9. He also announced it on Twitter—in one of his two tweets.

Trammell thanks the 7th District (Democratic) Committee for nominating him unanimously—one day before the state primary. That’s the effect of a safe district.

The utter refusal to try to work out a way to overhaul our broken, economically foolish, and inhumane immigration law is the effect of too many safe districts, as Democrats and Republicans each play to their base.

As wonky and technical as it may seem, redistricting reform may be the key to giving political compromise, including on immigration, a chance to re-enter American civic life.