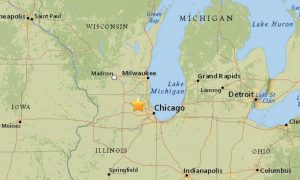 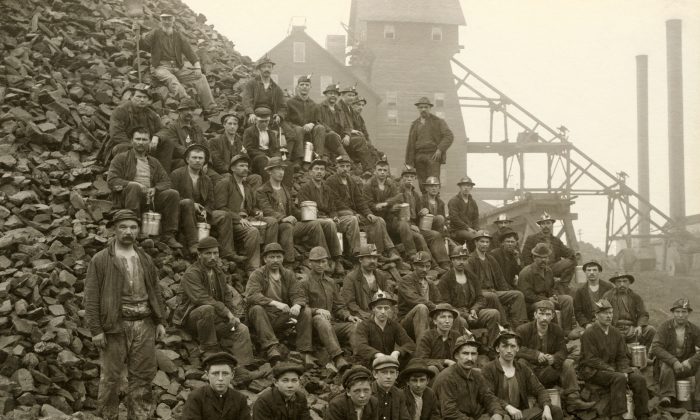 Miners outside of the Tamarack mineshaft in Upper Peninsula Michigan on 1905. (Adolph F. Isler/Public Domain)
Environment

Earthquake in Michigan a Reminder of State’s Peculiar History

A rare event happened in Michigan Saturday afternoon—there was a small magnitude-4.2 earthquake.

The epicenter of the quake was 5 miles south of Galesburg, some 14 miles from Battle Creek, according to U.S. Geological Survey (USGS) data.

Earthquakes east of the Rocky Mountains, including Michigan, are relatively rare and almost never damaging, notwithstanding a few corridors with greater activity.

The majority of quakes in places like Michigan occur miles down in the bedrock and are not linked to any geological faults—unlike, for example, quakes in California that are caused by the San Andreas fault.

There’s evidence that some eastern quakes are triggered by human activity, such as from water behind dams, fracking, and mining or quarrying operations.

These activities can change the stress conditions in the Earth’s crust, which induces faulting, said the USGS.

A USGS report in April, attributes an increase in minor earthquakes in dozens of areas across the country, with Oklahoma being the hardest hit, to the improper disposal of wastewater produced in the fracking process.

Related Coverage
Geologists Link Fracking With Earthquakes, but It’s Not What You Think

It is usually difficult to determine conclusively if human activity is primarily at fault, partly because the exact same human activity may cause an earthquake here, but not one there.

Mystery Quakes of the 1900s

In Michigan, there’s a history of mysterious, possibly human-induced earthquakes.

Most notably was the series of unexplainable events at the turn of the last century in the northernmost part of Michigan’s Upper Peninsula, called Keweenaw Peninsula, or Copper Country. This spit of land that projects into Lake Superior was the site of America’s first copper boom.

There had been numerous tremors already in the area starting in 1902. Then on July 26, 1905, one larger than any of the ones prior struck.

At about 6:20 p.m., a large explosion was heard. “Chimneys fell with a crash and plate glass windows were broken. … The explosion was heard far down in a mine and the shock was felt all over the Keweenaw Peninsula area and as far away as Marquette, about 70 miles southeast across Lake Superior,” records the USGS.

Historian Lisa A. Shiel documented the history of the region in her 2010 book “Forgotten Tales of Michigan’s Upper Peninsula.” From researching old newspaper accounts, Shiel discovered that between 1902 and 1909, more than 20 earthquakes rattled the region.

An entire chapter focuses on earthquakes, in which she describes the spate of quakes that occurred in 1905.

Shiel writes that the July quake was the last straw for some residents, who decided to flee the region because of it.

“After three years of earthquakes,” Shiel said in a press release for her book, “people were terrified. They had no idea what was happening.”

Ten months later, in May 1906, another large one hit. This time, the quake felt across a diameter of 30 to 40 miles, caused railway tracks to twist and the earth above the Atlantic mine to sink.

“[A]lmost directly above the lode of the mine, railroad tracks were severely deformed and caving occurred at the ground surface,” reads a report on seismic disturbances in Michigan by the Department of Natural Resources in 1977.

Shiel noted that today, the earthquakes of the early 20th century are often dismissed as mine collapses.

“Who should we believe?” Shiel said. “It’s impossible to look back now and say for certain what happened then. The mystery is part of the fun of these old stories.”