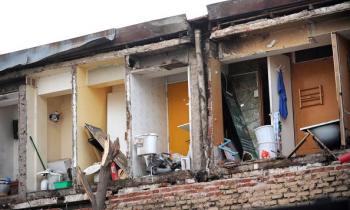 The walls of a hotel in Vina del Mar are seen destroyed after a huge 8.8-magnitude earthquake rocked Chile on February 27, 2010. (Martin Bernetti/AFP/Getty Images)
International

Epoch Times Staff
View profile
Follow
biggersmaller
Print
A massive 8.8 magnitude earthquake on the Richter scale hit Chile on Saturday. The quake that devastated Haiti on Jan 12 was 6.9. The earthquake happened in the early morning hours on Saturday, at 3:34 am local time (1:34 a.m. EST). It occurred roughly 70 miles northeast of the city of Concepcion and 200 miles southwest of the capital, Santiago.

The Chilean President Michele Bachelet has described the region as being in a "state of catastrophe." The death toll is so far impossible to estimate.

There are fears that the coastal quake could trigger tsunamis in the region. The Pacific Tsunami Warning Center has advised of possible tsunami waves in the northern Pacific, which could affect the west coast of the U.S., Alaska and parts of Asia.

New Zealand issued a tsunami alert, saying it would take waves 15-24 hours after the initial quake to reach the country.

According to the United States Geological Survey, coastal Chile has a history of very large earthquakes with 13 events of 7.0 magnitude or higher since 1973.

U.S. Secretary of State Hillary Clinton was scheduled to visit Chile on Monday during her six-day trip to Latin America which starts tomorrow and is also scheduled to include Uruguay, Brazil, Costa Rica and Guatemala.