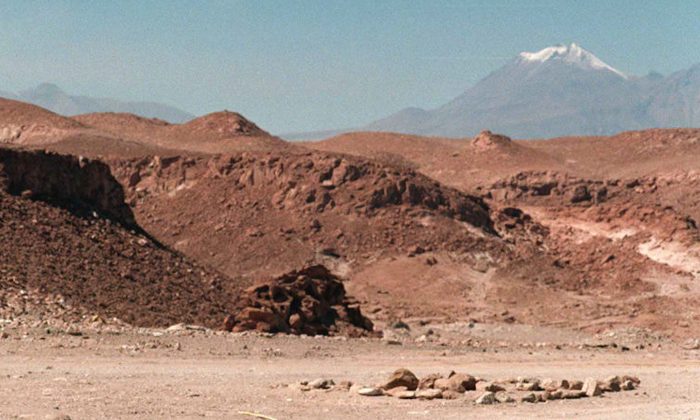 A file photo of Moon Valley in the Atacama Desert on April 7, 1997. Areas of the desert in Norhtern Chile allow geologists to see that cracks in the Earth's crust caused by earthquakes are permanent. (Olivier Matthys/AFP/Getty Images)
Science

The Atacama Desert in Northern Chile provides a unique snapshot of changes in the Earth’s crust over nearly a million years and after thousands of earthquakes.

“In all other places, surface processes erase them [changes] within days or weeks of their formation,” Structural geologist Richard Allmendinger of Cornell University told OurAmazingPlanet. Allmendinger and his colleagues published a study on April 28 showing that earthquakes of magnitude 7 or higher have caused permanent cracks in the Earth’s crust.

This could change the way geophysicists view the earthquake cycle.

“Their models generally assume that all of the upper-plate deformation related to the earthquake cycle is elastic—recoverable, like an elastic band—and not permanent,” Allmendinger said. “If some of the deformation is permanent, then the models will have to be rethought and more complicated material behaviors used.”

Allmendinger explained in an email to The Epoch Times that his findings don’t disprove the current geophysical models, rather they show that those models are over-simplified. Geophysicists currently analyze geodetic Global Positioning System (GPS) data with the assumption that deformations are elastic.

In 2010, the  National Aeronautics and Space Administration (NASA) released its first airborne radar images of the deformation caused by major earthquakes. A June 2010 Environmental News Network article explains that understanding the deformation allows researchers to understand how ground motions may redistribute strain to other faults nearby.

Thus, understanding the deformation of the Earth’s crust caused by earthquakes could help researchers have a clearer picture of what kind of strain other faults are experiencing.

He said his research will primarily help in understanding how strongly locked the crust and mantel are where plates meet during the period of accumulating strain before an earthquake.

When his Chilean colleague, Professor Gabriel González of the Universidad Católica del Norte, took him to a region of the Atacama Desert where the cracks were well-exposed, he was amazed and perplexed.

“[I’ve] never seen anything like them in my 40 years as a geologist,” Allmendinger told OurAmazingPlanet.

He and his colleagues discovered cracks of varying sizes, from inches to yards, caused by 2,000 to 9,000 major earthquakes over the past 800,000 to 1 million years. Allmendinger said he has reason to believe his findings apply to other regions of the world as well.

His study was published in Nature Geoscience on April 28.

Earthquake: What Does ‘Magnitude’ Mean?