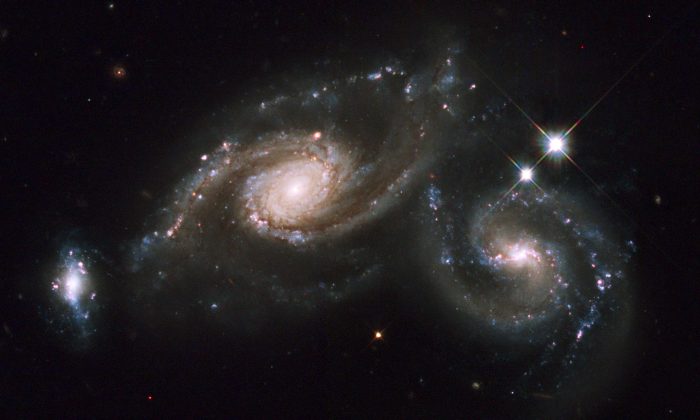 "Theoretically we thought that when the universe was only 5 percent of its present age, it would be a place full of chaos and disorder," Rupert Croft says. "Our simulation showed that the early universe might be far from being just this. It might contain beautiful symmetrical galaxies, like the Milky Way." (Hubble Heritage/CC BY-SA 2.0)
Science

Large disk galaxies, much like our own Milky Way, may have existed in the early days of the universe.

A new large-scale simulation suggests that the early universe—500 million years after the Big Bang—might have had more order and structure than previously thought.

The findings, published in the Astrophysical Journal Letters, will help guide researchers using next-generation telescopes like the Wide Field Infrared Survey Telescope (WFIRST) and the James Webb Space Telescope (JWST) as they search the sky for evidence of the first galaxies.

“It’s awe-inspiring to think that galaxies much like our own existed when the universe was so young,” said Tiziana Di Matteo, professor of physics at Carnegie Mellon University. “The deepest Hubble Space Telescope observations have thus only covered small volumes of space and have found very irregular, clumpy galaxies at these early epochs.

Enormous Hole in the Universe May Not Be the Only One

“It is not surprising that in these small volumes some of the small galaxies do not have regular morphologies like large disk galaxies. Similarly, numerical simulations have been limited in size so they have only made predictions for the smaller, clumpier galaxies at these early times.”

Di Matteo and Rupert Croft, professor of physics, completed some of the largest simulations ever created. The current simulation, called BlueTides, is 100 times larger than previous simulations—so large that it monopolized all of the National Science Foundation (NSF) supercomputer BlueWater’s memory and almost 1 million CPUs in order to complete the simulation.

The researchers began by seeding their simulation with constraints provided by the cold dark matter theory—the prevailing theory that explains what may have happened in the universe after the Big Bang.

After the simulation was completed, they looked at their data to see what they could find, much like observational cosmologists would do with data gathered using a telescope and were surprised to find a number of disk galaxies in the universe at 500 million years post-Big Bang.

Is the Universe a Hologram?
Cosmic Dance Challenges Our Understanding of Universe

Since disk galaxies are so large and complex, most researchers assume that they would take a very long time to form and would be rare, if they existed at all, in the early universe.

“Theoretically we thought that when the universe was only 5 percent of its present age, it would be a place full of chaos and disorder,” Croft said. “Our simulation showed that the early universe might be far from being just this. It might contain beautiful symmetrical galaxies, like the Milky Way.”

From their simulation, the researchers were able to make predictions about the galaxies’ luminosities, angular sizes, morphologies, colors, and expected number.

When telescopes like WFIRST and JWST come online, they will be able to search for galaxies that fit the descriptions developed by the BlueTides simulation. If simulation and observational results match, it could be a strong proof of the cold dark matter theory.

“Right now, we’re converging on an exciting time in cosmology. Previously, we couldn’t study disk galaxies in the early universe using telescopes because the galaxies were so faint and rare. We couldn’t study them on a computer because no computers were large enough to cope,” Di Matteo said.

“The technology has caught up, and we can complete the simulations using today’s large supercomputers, and we will be able to use telescopes like WFIRST to make the observations.”

Yu Feng, a former graduate student at Carnegie Mellon and now a postdoctoral researcher at University of California–Berkeley, contributed to the work, which the National Science Foundation funded. BlueWaters is located at the National Center for Supercomputing Applications at the University of Illinois.