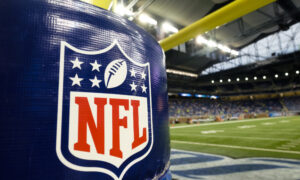 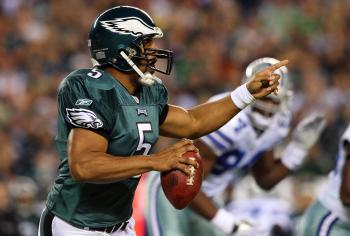 By Rahul Vaidyanath
biggersmaller
Print
In an action-packed Sunday where all 32 teams played, the Philadelphia Eagles (9–6–1) pulled off the biggest surprise by defying the odds and grabbing the sixth seed in the NFC with a dominant 44–6 win over the Dallas Cowboys (9–7).

At the start of the day, the Eagles needed to beat the Cowboys and have Tampa Bay and Chicago both lose. The Oakland Raiders (5–11) played the spoiler role to perfection as they avenged their 2003 Super Bowl loss to Tampa Bay (9–7) with a 31–24 victory. Chicago (9–7), meanwhile, lost on the road to Houston Texans (8–8) by the same 31–24 score.

After the game, McNabb spoke with Tiki Barber of Football Night in America. The crowd at Lincoln Financial erupted when they found out he Bears and Bucs had both just lost. “We tried not to be focused on it. We knew we had some type of a shot. We were hungry. This is what we play the game for.”

The Cowboys “controlled their own destiny” as the saying goes—with a win over the Eagles, they’d be in regardless of what other teams did. But the talented Cowboys, with 13 Pro Bowl players from a year ago, lost in embarrassing fashion. Owner Jerry Jones has some tough decisions to make in the off-season.
[caption id=”attachment_78508″ align=”alignleft” width=”320″ caption=”BAD DAY: Dallas QB Tony Romo walks off the field after a 44