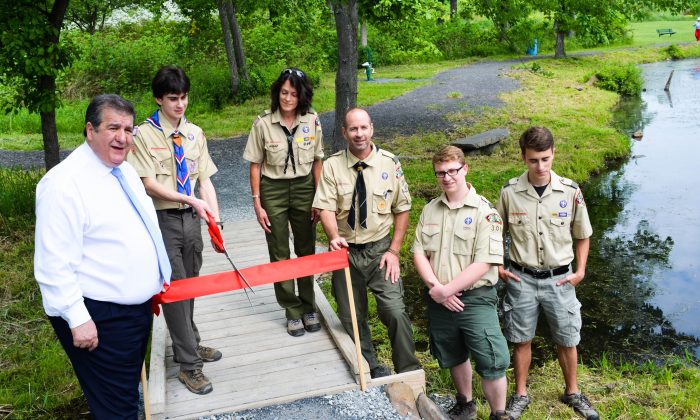 Mayor Joseph DeStefano was on hand for a ribbon cutting ceremony on May 27 and said that the bridge is a great addition to the park. “Kids get a bad rap,” the mayor said, “so it’s great to call attention to young people doing something good like this.”

Matthews worked with John Bianchi, the city’s Working Supervisor of Parks and Recreation, to find a project. The Parks Department often does not have the manpower for new projects, Bianchi said, and he welcomes Eagle Scout projects. This is the fourth project that Eagle Scouts have contributed to Middletown parks.

Wiley designed the walking bridge with the help of engineer Eric Fellenzer from Fellenzer Engineering LLP and presented two or three draft plans for Bianchi and the mayor to review.

According to Eagle Scout Noah Levin, who was there to celebrate the ribbon cutting, the bridge is strong enough to hold at least 12 people. He knows that because the troop stood on the bridge to test it out after it was completed.

An added feature of the new structure is that it is portable. Wiley said he and his helpers built the bridge at home and delivered it to the site. “It can be taken down for renovation or repair or moved to another location,” he said.

Wiley hails from Wallkill. His father is also Scoutmaster of Troop 300 of the Hudson Valley Council. “A project like this teaches scouts how to help other people and the community,” he said.