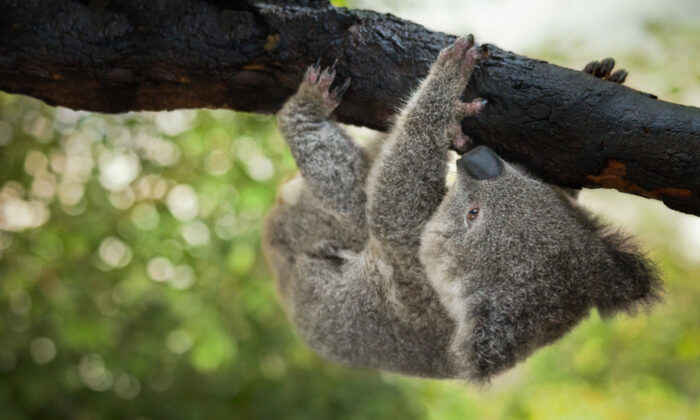 An adorable baby koala is finally fit for gradual re-release into the wild after being rescued not far from the site of a ferocious bushfire.

The koala was found abandoned on the ground in New South Wales on Sept. 8, 2019, in very poor condition. The baby marsupial had lost its mother, weighed less than 10 ounces (approx. 275 grams), and was missing most of its fur due to a pervasive fungal infection.

Introducing our new joey in home care. He was found by, and named after, a dog named Keli. Koala Street Keli presented…

Australia’s Port Macquarie Koala Hospital took to Facebook not long after their tiny inpatient’s first arrival. “Introducing our new joey in home care,” staff began. “He was found by, and named after, a dog named Keli.

“Koala Street Keli presented with an advanced fungal infection,” they explained. “We suspect his mother was also not well, or that she removed him from the pouch due to his condition.”

Hospital staff acknowledged that Keli’s recovery journey would be “a long process.” However, they also expressed confidence in their ability to nurse Keli back to optimal health for controlled re-release into a brand-new, safe, natural habitat.

Their efforts and optimism paid off.

On Jan. 2, 2020, Port Macquarie Koala Hospital staff posted an update on Keri’s condition on Facebook beside a heartwarming before-and-after photo comparison. “Just a brighter moment in all the tragedy in Australia at the moment,” staff began, “we wanted to share something good.”

Just a brighter moment in all the tragedy in Australia at the moment we wanted to share something good. Meet Koala…

“Look at Keli today,” they continued, “a whopping 1 kg in weight, the fungal infection has gone, and all his fur is regrowing. It’s still early days yet, we will get very excited when he makes 2.5 kg and it’s time for him to come into the ‘dehumanising trees’ in preparation for release back to the wild.

“Release will not happen until the cooler months,” staff assured their followers, “and thankfully there is still some good habitat left in selected locations.”

Many members of the public left relieved, grateful comments on Facebook for the hardworking veterinary and rescue staff. “While visiting Australia one of the highlights of the trip was visiting this koala hospital run totally by volunteers,” one person wrote. “The care, love, and dedication shown to these injured animals was heartwarming.

“We have sent a donation from Canada to help with the treatment of these injured koalas,” they added.

“Totally awful the devastation and loss it’s caused,” another follower commented. “But you guys are all truly amazing and wonderful in all that you do in saving the koalas. Just to let you know, a lot of people in the UK are following your efforts.”

New South Wales Environment Minister Sussan Ley explained that as of early January 2020, up to 30 percent of the region’s koala habitat has been destroyed by bushfires. The exact figure, she said, cannot be confirmed until the crisis has passed.

“We’ll know more when the fires are calmed down and a proper assessment can be made,” Ley explained, as per the Daily Mail. In the meantime, the minister took pause to recognize the gargantuan rescue efforts being made by local people.

“I get mail from all around the world from people absolutely moved and amazed by our wildlife volunteer response,” Ley revealed, “and also by the habits of these curious creatures.”

The Port Macquarie Koala Hospital, for one, has been working tirelessly since September 2019 to cope with the steady influx of burned, dehydrated, and traumatized koalas. Baby Keli’s recovery story is a small victory worth celebrating.