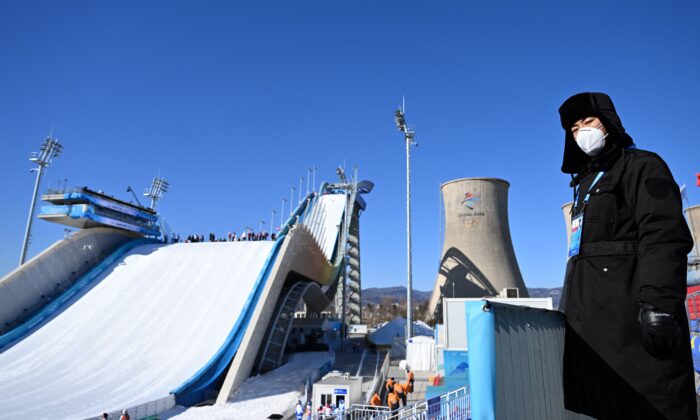 A Chinese security member stands at the Big Air Shougang venue in Beijing on Feb. 3, 2022 ahead of the Beijing 2022 Winter Olympic Games. (Manan Vatsyayana/AFP via Getty Images)
China Human Rights

The much-anticipated Winter Olympics in Beijing got off to an awkward start as a member of the local security forces wearing a red armband accosted and pushed a Dutch reporter who was attempting to report on the event.

The incident is the latest example of the communist regime’s intolerance of a free press. To some, it represents a microcosm of the official repression and abusive practices employed that have helped make the Winter Olympics controversial and drive some organizations to boycott the event.

In a clip of the incident aired by the Dutch broadcaster NOS on Twitter that quickly received thousands of likes and re-tweets, viewers can see NOS reporter Sjoerd den Daas standing in front of a busy street and overpass while delivering his commentary into a microphone when the guard moves up without warning and begins yelling and pushing him aggressively.

Den Daas tries to ignore the guard and carry on with his reportage, his gaze alternating between the camera and the increasingly menacing guard, until the camera cuts away.

NOS’s tweet of the clip states that den Daas was able to resume his on-air report a few minutes after the guard accosted him. But the incident quickly drew international attention as a spate of Western publications rushed to report it.

The Winter Olympics has already been a source of heated international controversy going back many months. The United States and a host of Western allies last year announced diplomatic boycotts of the Games in protest against the Chinese regime’s atrocities against Uyghur Muslims in Xinjiang and other abuses elsewhere.

While some observers praised the gesture, others argued that a diplomatic boycott would be a largely symbolic gesture, given that athletes, advertisers, the media, and visitors from many countries would still show up at the event.

Some experts also questioned the effectiveness of a boycott that did not involve an extremely broad coalition of nations such as those that participated in the boycott of the Olympic Games held in Moscow in 1980, the year following the Soviet Union’s invasion of Afghanistan.

Besides its human rights abuses, Beijing has also drawn intense scrutiny over its treatment of tennis star Peng Shuai, who disappeared from public view for a few weeks in November after alleging in a social media post that she was sexually assaulted by a former senior Chinese official. Despite her subsequent reermergence, concerns remain over her ongoing safety and wellbeing.

In December, the Women’s Tennis Association, in response to the controversy, announced that it would suspend all tournaments in mainland China and Hong Kong, drawing praise from figures as varied as Billie Jean King, founder of the WTA, retired star Martina Navratilova, and U.S. Senator Marsha Blackburn of Tennessee.