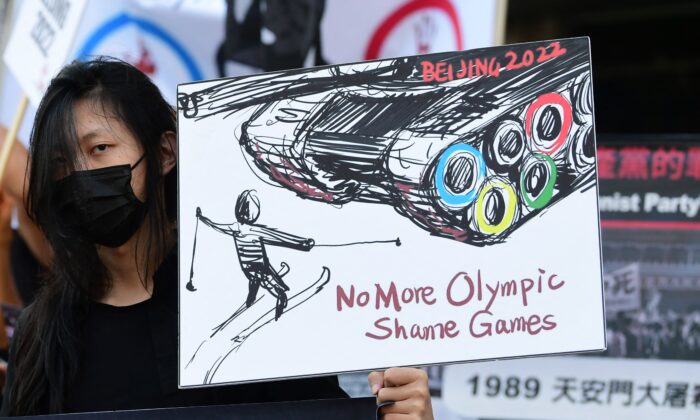 A woman holds a sign as activists rally in front of the Chinese Consulate in Los Angeles, California on Nov. 3, 2021, calling for a boycott of the 2022 Beijing Winter Olympics due to concerns over China's human rights record. (Frederic J. Brown/AFP via Getty Images)
China Human Rights

Experts Question Effectiveness of US Diplomatic Boycott of Beijing Olympics

President Biden’s remarks on Nov. 18 that he might not send U.S. diplomats to attend the Winter Olympics in Beijing in February is likely to have a limited effect either on the sporting event itself or on the human rights situation in China, observers said following the announcement.

While the concern for human rights, and particularly for the plight of the Uighur minority in western China, ostensibly driving Biden’s decision is admirable, the move comes across as more of a symbolic measure than one that might actually pressure Xi Jinping’s regime to change course and alter or abandon some of its practices, they say.

“We are now in a situation where forced labor and genocide are acknowledged as occurring, so for the games to proceed as if this has not occurred tries to place a distance between sports, politics and human rights that does not reflect reality,” said Justine Nolan, a professor at the University of New South Wales and the director of the Australian Human Rights Institute.

While not minimizing this reality, and the need to send a message to Beijing about human rights, Nolan questioned how effective a diplomatic boycott is likely to prove.

“Much depends on what type of boycott this is. A diplomatic boycott, as Biden seems to indicate, means a reduced or zero presence of U.S. officials (other than sports officials) at the games. I think this will have a limited effect,” Nolan said.

In Nolan’s analysis, a possible diplomatic boycott may have greater effectiveness as a psychological tactic. It really might make more sense to employ the threat of a diplomatic boycott in order to gain a concession from the Chinese regime.

“Perhaps it would be more useful to think about a diplomatic boycott as a form of transactional diplomacy—i.e., threaten to boycott and seek something specific in response, such as access to Xinjiang for U.N. officials, or greater transparency around production sites,” Nolan said. “By itself, as a standalone, measure I think a diplomatic boycott makes a limited statement.”

If there is to be an actual boycott, then it should encompass not only consular staff but corporate sponsors who propose to give their imprimatur to an event taking place under the auspices of Beijing, Nolan believes.

“It will be interesting to see if this is the games where companies downplay rather than promote their involvement in fear of their sponsorship further tarnishing their reputation,” Nolan said.

“Governments, companies and international sporting organizations all have the ability to use their leverage to make different demands for change—the question is will any of them actually do it?” she added.

In agreement about the limited effectiveness of a unilateral U.S. diplomatic boycott is Timothy Webster, professor of International and Comparative Law at Western New England University.

The problem is not with boycotts as such, Webster made clear. They can work and have done so in the past. But no two geopolitical situations are exactly the same.

“I do believe there is a place for boycotts of this nature. There have been boycotts of the Olympics in the past. People have looked at the U.S.-led boycott of Moscow as a successful example,” Webster said.

But Webster is quick to point out that the 1980 boycott, following closely on the Soviet Union’s invasion of Afghanistan the year before, was a multilateral action on the part of sixty-five governments, in contrast to the move the Biden administration now proposes.

“I think it terms of mobilizing states, which is necessary for a successful boycott of Olympics, you need to have your allies already on board,” Webster said. “A successful boycott would require the action of a body of states, otherwise it just looks like unilateral action. It’s purely symbolic. It doesn’t even apply to our athletes or our companies, we just hold onto our diplomats.”

Like Nolan, Webster questions the effectiveness of limiting or prohibiting the presence of U.S. diplomatic officials at the games, given all the other forms of representation likely to be on display.

“I’m a little skeptical of the diplomatic boycott, as I take it this would allow competitors to go, and sponsors, but prevent American diplomats. No one will be watching the Olympics to see the U.S. ambassador to China, so his presence or absence there won’t make much difference. I think there is a place for boycotts, but I am just not sure this is the time to launch one,” Webster said.

In Webster’s view, a unilateral diplomatic boycott might well be a case of too little, too late. There have been opportunities in the past to address the human rights problems in a proactive manner, and it is unfortunate that the issues have been allowed to snowball.

“There are tensions in the U.S.-China relationship right now. If we had taken a clear and consistent approach on the Uyghur issue, if it had been consistently at the top of U.S. policy toward China, that would be one thing. But instead, we gave Xi green light to go ahead with forced labor camps,” Webster said.

“For the U.S. not to send diplomats, that’s almost a PR coup for China. The U.S. would be sending corporations, athletes, but not its own diplomats,” he added.

Webster fully acknowledges the reality that some might take the presence of U.S. diplomats at the games as acquiescence in Beijing’s repression, and that the Chinese Communist Party might even use their presence for its own propaganda ends. Again, the problem is not with the idea of a boycott as such, but rather with the way that it looks to be shaping up under President Biden’s belated and piecemeal approach.

“I would like to see the U.S. act in a more multilateral fashion. The idea of a diplomatic boycott isn’t completely worthless, but at least in terms of what seems to have worked in the past, you need to be working with your allies on this,” he said.

Support for US Athletes?

Some observers see a need to try to balance concerns over the abuses with the need to provide credible support to U.S. athletes who take part in the event.

“The president is under a lot of pressure to show he’s tough on China. Given the political situation and the COVID-related travel restrictions in China, it would help him make a political point for him and U.S. officials of a certain stature not to go to the Olympics in Beijing,” said Dali L. Yang, William C. Reavis Professor of Political Science at the University of Chicago.