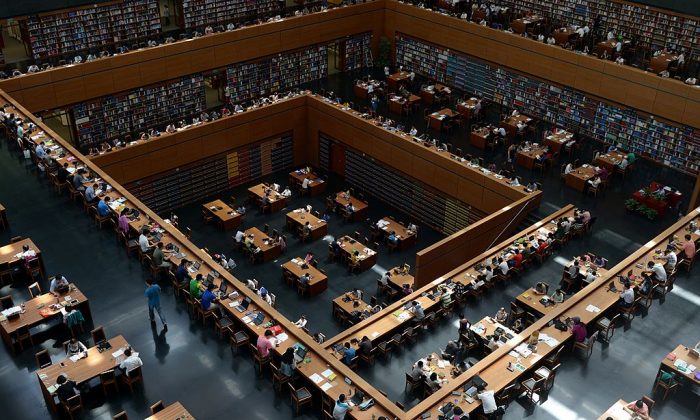 People study at a national library in Beijing on May 30, 2013. (Wang Zhao/AFP/Getty Images)
Chinese Regime

Netherlands-based publishing house Brill recently ended its distribution agreement with a Chinese state-run publisher, after the latter was found to have censored out a paper submitted to one of its journals.

In a statement published on its website on April 25, Brill announced it would no longer partner with China’s Higher Education Press to distribute four of its journals to customers outside China, effective in 2020.

The Dutch publishing house didn’t provide an explanation for its decision.

Brill, founded in 1683, is currently one of the largest academic journal publishers in the world, with more than 300 titles in subjects such as Asian studies, history, social sciences, human rights, and biology.

The agreement between Brill and Higher Education Press was signed in September 2011, according to a web post by China Education Publishing and Media Holding Corporation, another state-run publishing house.

Jacob Edmond, an associate professor in the department of English and linguistics at the University of Otago in New Zealand, was one of the academics who exposed an incident of censorship involving one of the Chinese publisher’s journals, Frontiers of Literary Studies in China (FLSC).

In an April 29 interview with U.S. education news website Inside Higher Ed, Edmond said he welcomed Brill’s decision and called it a “small win in what is an ongoing battle against censorship creep.”

“I feel saddened that we should have had to speak out publicly before Brill chose to take this step,” Edmond added.

He and his colleague Lorraine Wong, assistant professor at the university’s Chinese studies department, recounted in writing how they witnessed Chinese censorship for a planned special issue of FLSC that they were invited to co-edit.

The account, along with the censored article, was published in April, in volume 40 of the U.S.-based journal Chinese Literature: Essays, Articles, Reviews.

Edmond and Wong wrote that while overseeing the peer-review process for the special issue, they accepted four essays. The issue was slated to be published in the first half of 2018. However, when they received proofs for the issue, shortly before the publication date, one of the essays, written by Liu Jin, associate professor of Chinese language and culture at the Georgia Institute of Technology, was missing.

Liu’s essay focused on the works of Chinese comic artist Li Xiaoguai, known for his caricatures and invented Chinese characters that satirize the Chinese Communist Party.

In addition, Edmond and Wong said that their introduction essay was “crudely edited to remove all mention of Liu’s article.”

They then wrote to the FLSC editor-in-chief, Zhang Xudong, a professor of comparative literature and East Asia studies at New York University.

Zhang told them “that the removal of Liu’s essay should come as no surprise, since FLSC has its editorial office in Beijing and so must abide by normal Chinese censorship,” Edmond and Wong wrote.

“However, Zhang went further. He went on to say that Liu’s essay should never have been accepted and that he was now using his editorial prerogative to reject it,” they continued.

Inside Higher Ed, in a separate article published April 19, reported that it reviewed email correspondence they had with Zhang, which verifies their account.

Higher Education Press, founded in May 1954, is directly under the leadership of China’s Ministry of Education, according to its website. It currently is headed by Su Yuehong, the publisher’s president and Party secretary.

Higher Education Press has clearly stated its desire to toe the Party line. In September 2018, it called a meeting for the publisher’s top leaders and Party committee members, according to its website. The meeting concluded that it “must follow the educational and publishing policies of the [Chinese Communist] Party,” as well as agree with “the leading role of Marxism.”

Edmond and Wong wrote in their account that since their special issue was to be published outside China, they believed it would not be subject to censorship. “We were perhaps naive to assume that the association with Brill and the international editorial board indicated that the journal operated according to the normal standards for non-Mainland publications and would not be subject to censorship—a mistaken belief shared by us as editors and our contributor, Liu.”

They expressed concerns that “the distinction between publishing inside and outside the PRC [People’s Republic of China] is breaking down.”

This is not the first time that an international scholarly journal was subject to Beijing’s censorship. In August 2017, Cambridge University Press initially agreed to a Beijing demand to block online access to 315 articles of the journal “China Quarterly” in the Chinese market. After public criticism, the publisher reversed its decision.

The blocked articles included topics such as the spiritual practice persecuted by the Chinese regime Falun Gong; the Tiananmen Square Massacre; Tibet, another site of Chinese suppression; and the Cultural Revolution, a brutal political campaign—all considered taboo subjects by Beijing.

Another publishing giant Springer Nature, which is headquartered in the UK but is owned by a German publishing group, agreed to pull access to a number of articles in China to comply with Chinese regulations in November 2017, according to Reuters.

The Financial Times estimated that at least 1,000 Springer Natures articles were blocked, which included keywords such as” Taiwan,” “Tibet,” and “cultural revolution.”