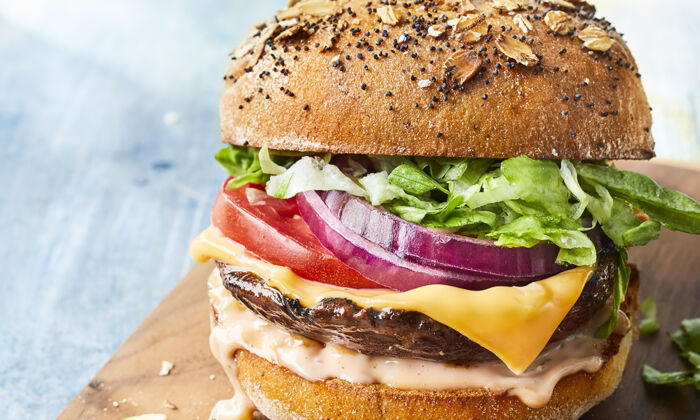 Portobello mushrooms stand in for meat patties in this recipe for veggie burgers with all the fixings. (Greg Dupree/TNS)
World

Just west of Amsterdam in the Netherlands, another line has been breached in the global ‘war on meat.’ For fear of its impact on the climate, the city of Haarlem has moved to outlaw at least some advertisements for meat in public areas.

The resolution, which refers to “bioproducts” rather than meat, came from Ziggy Klazes, a Haarlem city councilor who represents the GroenLinks (“GreenLeft”) party.

She called it her “raised middle finger to the meat industry” in a Sept. 3 column.

The law would take effect in 2024 to honor existing contracts with advertisers.

It would also ban ads for fossil fuels, fossil fuel-powered cars, and vacation flights from those same public spaces, which include bus stations and advertising columns.

Haarlem’s proposed ban comes as many environmentalists redouble their efforts to limit or even eliminate animal agriculture, particularly in the Netherlands.

The United Nations’ Food and Agriculture Organization (FAO) attributes over 14 percent of greenhouse gas emissions to livestock, due in part to methane from their burps and farts.

Ninety-five percent of Dutch adults eat meat, though 75 percent do not eat it every day, according to the country’s national statistics agency, CBS.

As it happens, the Netherlands is a significant center of animal agriculture. That may soon change.

In June, after decades of ever-tougher laws that target the ecological effects of farming, the Dutch government trumpeted one of its most aggressive moves yet.

It proposed massive, area-specific cuts to nitrogen emissions, ones large enough to shutter about a third of the nation’s farms by 2030.

The announcement sparked intense protests by farmers, truckers, and others in and beyond the Netherlands—the latest since a similar round in 2019, after members of the liberal D66 party proposed slashing the country’s livestock numbers in half.

The country is also home to a “Food Innovation Hub” launched by the World Economic Forum and partners that range from MasterCard and PepsiCo to the UN’s FAO.

One Dutch trucker who protested over the summer thinks Haarlem’s resolution is part of that bigger picture.

“It is not going well here in my country,” Mark de Jong told The Epoch Times in an Aug. 9 message.

Wybren van Haga, a member of the Dutch parliament and leader of the Belang van Nederland political party, described the ban as “an attack on free enterprise and bad for the economy.”

The Centrale Organisatie voor de Vleessector, which represents the meat industry, expressed similar worries about overreach, as reported by the Trouw newspaper and other Dutch sources.

Tom Russcher, press officer for the populist Forum for Democracy party, isn’t sure if the ban will stand up to a serious legal challenge.

He told The Epoch Times on Sept. 9 that it’s part of a much larger trend: “The government deciding what people have to do.”

His country already has restrictive policies on cigarette advertising. Could images of meat soon be treated the same way?

If so, Russcher said, “It’s starting in Haarlem.”

In an article for WATTPoultry.com, a publication aimed at the ag industry, American Roy Graber suggested that “the precedent appears to have been set” for similar bans elsewhere, even in the United States.

Meat Ads and ‘Meatposting’ Fill Some with Disgust

Meanwhile, many environmental groups are celebrating.

“The meat and dairy industry is responsible for 19 percent of global greenhouse gas emissions. So this is good news for the climate,” Greenpeace UK wrote in a Tweet.

“This is a great step towards reduced meat consumption and the promotion of more sustainable food systems,” Eurogroup for Animals wrote on Twitter.

While not all environmentalists are anti-meat, some eco-activists don’t shy away from sharing their distaste at the very sight of animal flesh.

One 2021 article from the climate Substack ‘Heated’ criticizes the common practice of “meatposting”—that is, sharing savory pictures of beef, pork, chicken, lamb, and other comestibles for carnivores on Facebook, Instagram, or other social media.

They argue that “meatposting” props up an industry they see as harmful to the planet.

“GreenLeft” initially responded to an email from The Epoch Times, but did not answer questions by press time.