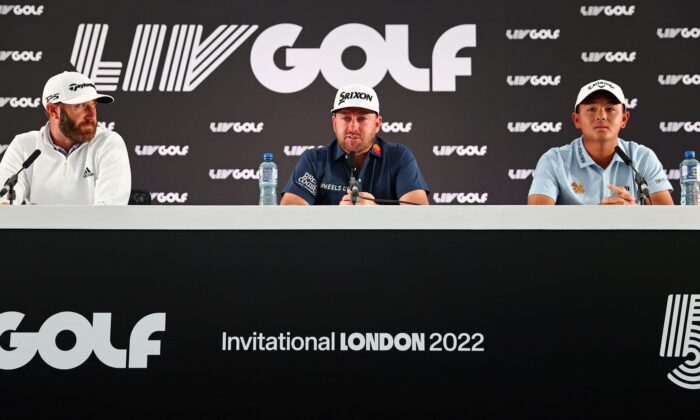 Former World No. 1 ranked and two-time major winner, Dustin Johnson, announced the resignation of his PGA Tour membership at a press conference on Tuesday at the first LIV Golf Invitational Series event at The Centurion Club, in St. Albans, England.

LIV Golf is a new golf series backed by a Saudi-funded rival league to the PGA Tour, and is offering a total purse of $25 million in prize money at this first Invitational.

The Daily Telegraph reported Johnson, received upward of $125 million to join, and other players are likely to have also received signing bonuses.

Among those on the PGA Tour who have also announced their resignation, including Sergio Garcia, Kevin Na, Louis Oosthuizen, Charl Schwartzel, and Branden Grace.

However, the USGA released a statement Tuesday to not remove any players who have qualified for next week’s U.S. Open adding:

“… Our decision regarding our field for the 2022 U.S. Open should not be construed as the USGA supporting an alternative organizing entity, nor supportive of any individual player actions or comments. Rather it is simply a response to whether or not the USGA view playing in an alternative event without the consent of their home tour, an offense that should disqualify them for the U.S. Open.”

“I resigned my membership from the tour I’m going to play here for now and that’s that’s the plan,” said Johnson. “About what the consequences are going to be, obviously I can’t comment on how the tour is going to handle it. In regards to the majors, hopefully they’re gonna allow us to play.”

Johnson added on Tuesday he “had to think long and hard” about his resignation, potentially disqualifying him from competing in the Ryder Cup for the United States, and his certain addition to the PGA Hall of Fame.

“I’m exempt for the majors. So I plan on playing there and unless I hear otherwise, there was another thing that I’ve really had to think long and hard about and ultimately, I decided to come to this and, play out here and I’m excited about it.”

Johnson’s last victory came at the Saudi International in 2021.

“Obviously the Ryder Cup is unbelievable, and it’s something that’s definitely meant a lot to me. Proud to say that I’ve played and representing my country and hopefully I’ll get a chance to do that again, but, I don’t make the rules.”

When asked if he chose money over his country, “I chose what is best for me and my family,” Johnson said.

Speaking alongside Johnson was former U.S. Open champion Graeme McDowell confirming that he has yet to give up his PGA membership stating “I don’t feel I need to. I don’t want to get into a legal situation with the PGA Tour.”

Phil Mickelson confirmed his entry into the LIV event on Monday, and again apologized in a statement that he “empathizes” with those who are critical of his decision join a league funded by the Public Investment Fund in Saudi Arabia—whose government/leaders have been accused of human rights violations.

“I am ready to come back to play the game I love but after 32 years this new path is a fresh start, one that is exciting for me at this stage of my career,” Mickelson wrote on social media.

Mickelson also stated that he would be playing the last two majors, after not defending his PGA Championship in May, at the U.S. Open and The Open Championship.

“His contributions to the sport and connection to fans around the globe cannot be overstated and we are grateful to have him,” said Greg Norman, the CEO and commissioner of LIV Golf Investments. “He strengthens an exciting field for London where we’re proud to launch a new era for golf.”