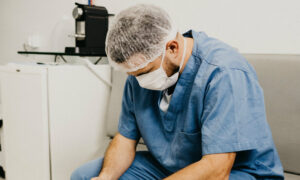 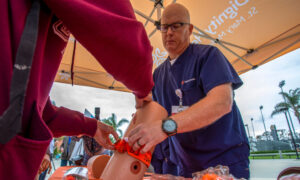 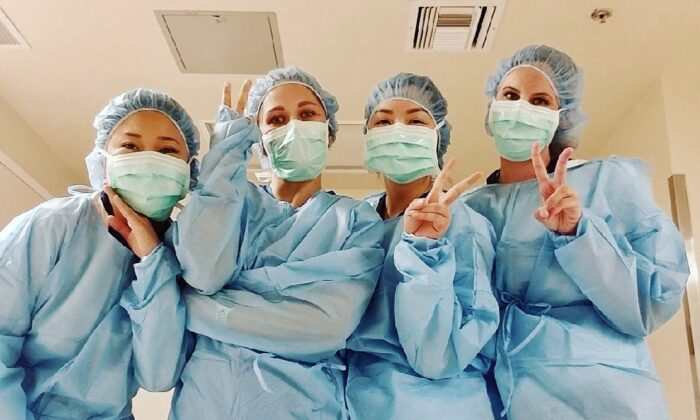 Nursing student Ryane Panasewicz (R), poses with her colleagues at the Anaheim Global Medical Center in Anaheim, Calif. Panasewicz and other nursing students may not graduate as planned this year due to a disruption by the COVID-19 pandemic of clinical hours required. (Courtesy of Ryane Panasewicz)
Southern California

Pandemic Puts Graduation at Risk for Many California Nursing Students

The career path of an estimated 10,000 nursing students in California has been disrupted by the COVID-19 pandemic, and for students like Ryane Panasewicz, 27, no answers or solutions have been offered.

“We’ve just been on standby … waiting to hear what’s going to happen,” she told The Epoch Times. “It’s like drawing the short stick … going to nursing school right now, when COVID-19 comes out.”

Panasewicz, a nursing student at West Coast University’s Anaheim campus, was 12 weeks from graduation when hospitals across the county began closing their doors to students.

“They literally said absolutely no students,” she said. “All of our clinical sites have shut down.”

The California Board of Registered Nursing (BRN) has strict clinical requirements that students must adhere to in order to graduate. They must have 75 percent patient contact and 25 percent simulation—a technique that replaces real-world experiences—in order to be eligible for the licensing exam at the end of the program.

For Panasewicz, who has already signed a contract for a New Grad Residency in the Emergency Department at Duke University Hospital for July, this cancellation poses a serious threat to graduating.

“I’m so discouraged … I’ve got to do something,” she said. “I can’t let [this opportunity] slip through my fingers. I’ve worked hard to get that.”

When appeals to Gov. Gavin Newsom and the BRN didn’t produce results, Panasewicz teamed up with a classmate, Brea Ortiz, to start a petition on Change.org.

“We need the BRN to soften their restrictions and provide an alternate solution for the clinical hours to the thousands of student nurses that are impacted by the crisis,” the petition says.

“The fate of our future employment lies in the hands of those at the BRN. We desperately want to partake in alleviating the nursing shortage in California.” (A 2017 study in the American Journal of Medical Quality predicted California could have a shortfall of almost 200,000 nurses by 2030.)

Panasewicz was overwhelmed by the number of people who signed the petition.

“We totally thought it was just going to be something small,” she said. “It’ll probably just float around our school and [get] like 500, 1000 signatures.”

“It was encouraging to hear that other students from other states were supporting us too,” Panasewicz added.

One of the signees, a nursing student in California named Danielle Schwab, wrote a comment on the petition, “I believe that our graduation should not be postponed due to COVID-19. It is a nurse’s duty to attend to these clients, and if nursing students are not able to get experience during this time, how are they supposed to be prepared for pandemics like COVID-19?”

The petition got the attention of Lashonda Shannon, associate governmental program analyst at the BRN.

“[Panasewicz] told me her story, which just absolutely broke my heart,” Shannon told The Epoch Times, making it clear that she doesn’t speak on behalf of the BRN.

“She’s not the only person that’s petitioned the board. I know community colleges as well as private sector community colleges have asked the BRN to either increase simulations or to provide an alternative so that students can still graduate on time and then enter the workforce.”

But thus far, she said, the board members have been “completely unresponsive.”

California’s capping of simulations at 25 percent of the clinical experience is somewhat unusual compared to other states, Shannon said. Most states have no restrictions or they cap simulations at about 50 percent.

Shannon cited a study by the National Council of State Boards of Nursing that shows no difference in outcome between students who have 25 percent or 50 percent simulation.

“Unfortunately, our board members just haven’t adopted new regulations to reflect what the rest of the country is doing and … what the data shows we should be doing,” she said.

“It’s just really up in the air,” Shannon said. “That’s why students have started the petition. That’s why we’re calling the governor’s office, because we have nowhere else to turn. There is no other option besides public outcry in order for us to get something done.”

Students Encouraged to Help With Pandemic

On March 30, Newsom signed an executive order to expand the state’s health care workforce. Nursing students were among those encouraged to join the California Health Corps.

The following day, the BRN released a statement urging nursing students to help during the COVID-19 pandemic.

“The Board of Registered Nursing advises healthcare providers and the public that nursing students can be deployed to assist in healthcare facilities today,” Loretta Melby, BRN acting executive officer, said in the statement. “These students will not be violating the Nursing Practice Act by providing services without a license.”

The BRN developed a schematic that correlates a nursing student’s academic progression with a similar role in the health care community.

While this statement effectively allows students to assist during the health crisis, there’s still no information on how or if their efforts will satisfy the requirements needed to graduate.

Shannon contends that the BRN’s statement fails to address the main question: Will nursing students be able to complete their programs?

“If the BRN is saying it’s okay for nursing students to be deployed to the front lines in healthcare facilities to help, they should also be saying that their time spent working can be used to satisfy their clinical hour requirements,” she said.

“California needs a well-equipped health care system now more than ever and the BRN should be a solution, not a roadblock.”

Governors in Oregon, Virginia, and Texas have put measures in place that allow nursing students to assist during the crisis, stipulating explicitly that their time at work will count toward graduation.

“DCA [Department of Consumer Affairs] and BRN are aware of, and sympathetic to, the predicament some nursing students are in as well as the need for health care workers during the pandemic,” Veronica Harms, deputy director of communications for DCA, told The Epoch Times in an email.

“Our goal … is to get the nursing students out into direct patient care experiences to help in an ordered and expeditious manner while encouraging the academic institutions that these nursing students are enrolled in to allow them to receive academic credit for their time spent assisting in the care of our COVID-19 patients.”

But if the BRN maintains control over whether or not restrictions can be loosened for the sake of students closer to graduation, it’s unclear to what extent academic institutions have power to give the students credit.

Who has the final say on who can graduate: the BRN or the school?

“But as we sit now, there is no regulatory relief from statutes that require students to have several hundred hours of direct patient care in order to graduate.”

Casanover said DCA, in response to the governor’s executive order, will allow schools to submit “waivers” to current regulatory restrictions. Then, the DCA and the BRN will decide if the waivers will be granted or denied.

“The situation is still very much in flux,” he said.