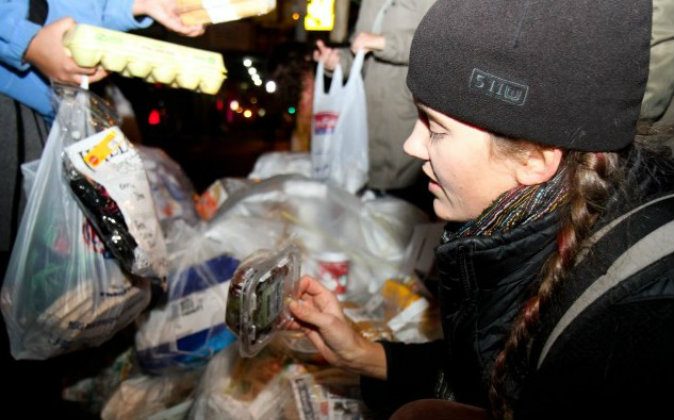 NEW YORK—Every day, bakeries, grocery stores, and restaurants take food products off their shelves to make room for new and fresh goods. Although these products are no longer deemed suitable for sale, they are not necessarily inedible.

Corporate policies for disposing of food vary from store to store, and laws vary from state to state.
Whole Foods spokesperson, Michael Sinatra, reported that New York City locations donate food, use old-but-still-edible food from their shelves in soups and other dishes in their restaurant, and compost the rest. Its Bowery store gave 55,000 pounds of food to the Bowery Mission last year.

Pret A Manger gives its leftovers to City Harvest, an organization that picks up scraps from all segments of the food industry in the city to feed to those in need. City Harvest will collect approximately 30 million pounds of excess food this year, which will find its way to 600 community groups.

A Starbucks employee reported that she was told not to give food away at the end of the night, but that she could take it home for herself. The Midtown location she works at used to give the leftovers to a church, but the church stopped picking up and now they go in the garbage.

The employee thought the FDC agreement had to do with liability, that it ensured the organizations agree Starbucks is not liable if anyone gets ill from old food. The Department of Health and Mental Hygiene, however, said there is no problem with liability.

But most food ends up in the trash.

Enter “dumpster diving” or “urban foraging”—a common but unregulated practice, according to the Health Department spokesperson.

Adam Alexander, 24, a student at Columbia’s teacher’s college and a freegan, pulled a loaf of bread out of the trash in front of Life Thyme Natural Market on Sixth Avenue and Ninth Street Monday night. A smile lit his face—the delight of discovery, of a forager finding the sought-after prize.

This urban foraging replaces the weekly trip to the grocery store for freegans.
A freegan is someone who finds ways not to participate in commerce—due to dismay in the “economic model where only profit is valued, at the expense of the environment, and human and animal rights,” according to their website.

“It doesn’t make sense for [this food] to go loaded up on trucks and traveling across states to other places to be disposed of in a way where this good food will rot,” said Janet Kalish, a freegan who helped lead a dumpster diving tour in Manhattan on Monday night.

She held up a banana with a sticker marking its origin in Honduras and imagined its life’s journey: Trees cut down in the rainforest to make way for a banana plantation, pesticide spray adversely affecting the health of local inhabitants, shipped in packaging that also ends up in the trash, burning fossil fuels to cross the ocean, reaching its final destination—a curbside garbage on Sixth Avenue downtown.

“We are not suggesting that this should continue so that we can get good food. We’re suggesting that this should change—and that while it’s still happening, we should get good food,” said Kalish.
The group of 20 to 30 people following Kalish on the foraging tour were taken on an unconventional trip to the market. They were of all ages, from all walks of life, and many expressed the desire to stem food waste.

Their yield varied in freshness. An urban forager bit into a cinnamon bun in front of Bagel Bob’s on 10th Street and University Place. “It passes,” he decided. It came from a bag of baked goods uncontaminated by any other rubbish.

Cindy Rosin described some of her finds as she pulled them out of the trash heap at Life Thyme: “slightly floppy,” carrots, “squishy” pears. Still good for carrot stock in soup or fruit puree, noted Rosin.

Much of the food they found was fairly fresh, however, and fit for a feast: Crisp, green lettuce, strawberry parfait, eggs, milk, tomatoes, chocolate spread, artichokes, bananas with only a few spots on them, collards, cauliflower with a tinge of brown, apples, chestnuts, sandwiches, microwavable meatloaf, and more.

Some of the perishables had a “sell before” date listed for the following day, the date on eggs in a grocery store garbage on Sixth Avenue and 12th Street had two weeks yet to pass. Rosin says these items usually last another week after the listed date in her extensive experience; she has been a freegan for eight years, but started dabbling in dumpster diving 15 years ago.

Within a couple of hours and a few block radius, everyone had a full bag of goodies, some with multiple grocery bags brimming.

Some freegans said they’ve been hassled by shop owners, but in the end the law is usually on their side, since most garbage is kept on public property. The Freegan.info tour taught conscientious foraging—tying up bags again once the search is over, keeping it neat, and staying out of the way of passersby.

Yossi Halperin, 23, rescues excess food and feeds it to people in need through his volunteer work at Food Not Bombs, an international nonprofit with a few chapters in New York City. He pointed out that it is not only food that goes to waste.

“You have department stores throwing out not just food, but also bedding and other things people need to make way for a new shipment when it comes in,” said Halperin.

The freegans had fun with Halloween costumes they found in Party City’s garbage. In addition to feather masks and kid’s Spiderman suits, they found festive napkins, lollypops, and more.

“The only way to get businesses not to waste is to make it law,” said Halperin as he cut up broccoli, green and in good condition, that would have sat in a Brooklyn dumpster if Perelandra Natural Food Center hadn’t donated it to Food Not Bombs.

Some companies did not respond to inquiries about their food disposal policy, including Pax Wholesome Foods, Le Pain Quotidien (where the freegans found a bountiful stash of food waste), Dunkin’ Donuts, and Kmart.