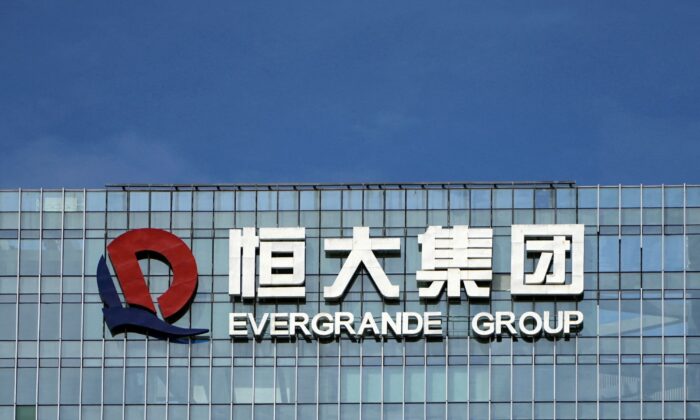 The company logo is seen on the headquarters of China Evergrande Group in Shenzhen, Guangdong province, China, on Sept. 26, 2021. (Aly Song/Reuters)
US-China Relations

The default of Chinese real estate giant Evergrande, as well as the firm’s ostensibly “dubious financial and accounting practices” pose risks to U.S. investors, Sens. Marco Rubio (R-Fla.) and Todd Young (R-Ind.) said. In light of this, they called for increased risk disclosures and due diligence on the part of registered investments funds that invest in China.

“The simple truth is that Chinese companies provide insufficient transparency and accountability,” the senators wrote in a Feb. 17 letter to Securities and Exchange Commission (SEC) Chairman Gary Gensler. “Too many U.S. investors—especially passive investors in mutual funds and ETFs that track indexes—are not fully aware of these unseen risks.”

The opaque accounting practices of Chinese firms were the main target of a 2020 U.S. law that allows the SEC to delist foreign firms from American exchanges if they fail to comply with the Public Company Accounting Oversight Board’s (PCAOB) audits for three consecutive years. It was adopted after China repeatedly blocked overseas regulators, including the PCAOB and SEC, from inspecting full audit reports of publicly traded companies headquartered in mainland China and Hong Kong, citing national security and privacy.

But the senators said that more needs to be done to protect U.S. investors from risks posed by Chinese investments. In particular, they cited concerns about the consequences of the default of Evergrande, a Chinese real estate developer whose more than $300 billion in liabilities include nearly $20 billion in U.S. dollar-denominated bonds. They note that U.S. investors have channeled investments to Evergrande for years through debt and equity markets.

Ratings agencies’ assessment of Evergrande as being in default in December came after many months when the lack of adequate disclosures from Evergrande concerning its ability to make payments on its bonds, and the timetable for doing so, deprived investors of a basis for making informed decisions about their investments in Evergrande.

Experts have attributed the default of Evergrande to a pattern of mismanagement by Chinese Communist Party officials, who relaxed lending requirements with a view to stimulating economic growth in the wake of the 2008-2009 financial meltdown. In this environment, Evergrande borrowed way out of proportion to its ability to make payments over time and branched out into myriad sectors and industries including electric vehicles, mineral water, and cosmetic surgery. Evergrande quickly became overextended and insolvent much like insurer Anbang and conglomerate HNA Group.

Without transparent auditing practices, Evergrande kept its parlous state hidden from investors over years. In their letter, the senators said the firm appeared to have engaged in several “dubious” accounting practices, including listing properties that have not even been built yet as assets on its balance sheet, making use of overseas entities to hide the firm’s liabilities, collateralizing new loans with deals financed in the past, and overcapitalizing interest payments.

The senators acknowledged that Evergrande was not directly listed in the United States. But this is small comfort given that a variable interest entity (VIE) structure facilitated the trading of Evergrande shares through American Depositary Receipts. Although the SEC called out the risks involved in investing in VIEs in a September 2021 investor bulletin, the senators maintain that the regulator is “not doing enough to protect U.S. investors from fraudulent or politically motivated actions of Chinese companies.”

Rubio and Young urged the SEC to seek registered investment funds to enhance their due diligence and risk disclosures when considering investments in China.

The SEC declined to comment on the letter from Rubio and Young.