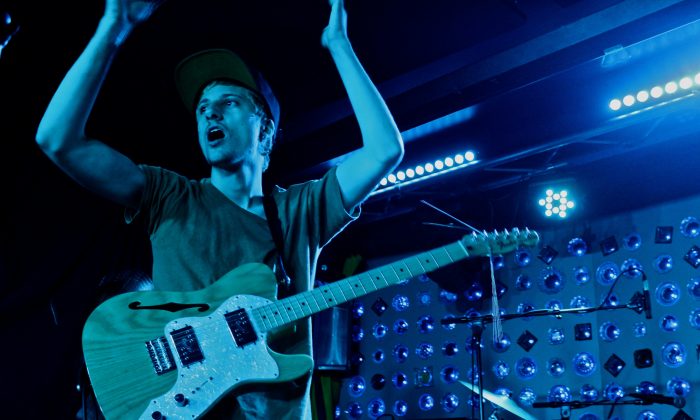 Baby’s All right located in South Williamsburg is a funky, relatively initmate bar/restaurant where many 20-somethings come to eat, drink and relax and of course, dance after 11 P.M. that happens to have a funky looking venue in the back that fits with the atmosphere of the place.

Dub Thompson headlined the place Friday night in support of their debut album, 9 Songs. Their set primarily consisted of tracks from that album, including “Dogfaces,” “Heyward!,” “No Time,” and “Epicondyles.” What was very impressive of this indie, noise rock band from California was that although they are only 19 years old and not yet old enough to legally drink at a venue like Baby’s All Right, they already shown that they have the capability to grow tremendously as musicians.

The venue itself have been half empty by the time they went onstage but vocalist and guitarist Matt Pulos sure made it seem like the room was packed with people bobbing their heads and bouncing around.

Modern Vices, a self proclaimed dirty Doo Wop quintet from Chicago, kicked things off. If you hear his voice prior to seeing him perform, you would think that vocalist Alex Rebek is much older than 19-20.

Brooklyn based Semi Femme was the next to perform and provided a very short set. It was rare to see a band where there are two bassists but no guitarist which made their songs sound like something from a synthesizer.

Perhaps the most interesting band of the night aside from Dub Thompson was Ought. Like the headliners, their set consisted tracks from their debut album More Than Any Other Day. They were loud, eccentric and all the weird words that exist in the Oxford Dictionary in the most satisfying way possible.

Dub Thompson and Ought will continue their North American tour as they make a stop in Toronto tonight before coming back to the States to perform in Indiana Wednesday.