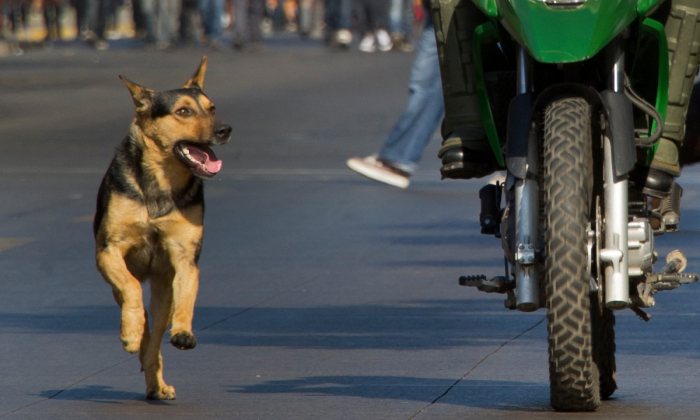 A drunk driver on a motorcycle had a 30-minute confrontation with a dog on the evening of March 3, according to Headline News.

The motorcyclist, whose surname is Shao, had been drinking that evening, and was riding his motorcycle home in Jiangsu Province, China. A video of the incident was posted on Weibo by Headline News.

As seen in the video, he was resting with his feet planted on the ground and head slumped forward. The bike was still running, as the headlight was on.

From the other side of the street, a dog trots out of the shadows and approaches the back of the motorcycle, sniffing at the vehicle. It then approaches Shao and sniffs his right leg.

This catches Shao’s attention, as his head turns over to look down at the dog. The two make eye contact, and the dog steps away from him, appearing to bark at Shao.

Then the confrontation begins.

The video fast forwards, and Shao is now shining the light of his motorcycle at the dog. He turns the light on and off, and also turns on the high beam, focusing it on the dog. The dog moves closer to the gate where the security camera is located. Shao even appears to gun the engine to scare the dog with the sound.

Shao points at the dog, and appears to be yelling at it. By this time, the dog has slipped through the gate, and is sitting safely on the other side. Shao gets off his bike, and though his footing is somewhat wobbly, approaches the gate to apparently accost the dog once more.

When it looks like Shao is just about done with the confrontation and ready to walk away, the video fast forwards once more to him riding his bike toward the gate. He bumps his motorcycle into the gate, several times.

According to Headline News, Shao was in front of a fabric factory. The report claims that Shao was trying to knock the gate open to continue his fight with the dog. When the manager of the fabric factory heard the sound of something hitting the gate, he called the police.

The police stopped Shao once they arrived. No information was given if Shao was arrested for drunk driving. The report said Shao was drinking “clear liquor,” a 100-proof liquor common in China.

Often in China, one’s alcohol tolerance is referred to as one’s “ability to drink.” This ability to drink, especially among men, and sometimes women, is a sign of pride.

This drinking is held at round dinner tables, where the clinking of glasses and tossing of cigarettes between one another shows a sign of brotherhood among the drinkers.

One father accidentally hospitalized his child after he decided to improve the boy’s drinking ability. He gave his son over two shots of clear liquor, the same type that Shao drank.

The boy passed out, and the family did not pay much attention to it at first. They were only concerned after they could not wake the child from shouting at him, and took the boy to the hospital.

The doctor who cared for the child said that the stench of alcohol could be smelled before the family even came close.

At the hospital, he was found to have acute alcohol poisoning, and had his stomach pumped. The boy recovered after five hours of care. The father learned his lesson, and decided to never force his son to drink again.