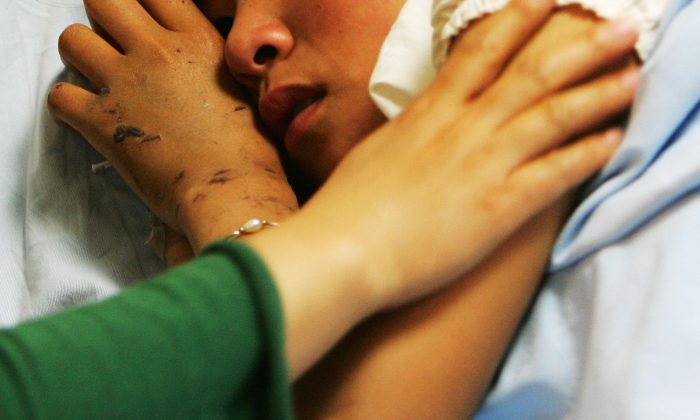 An alcoholic man beat his two children with wooden sticks and forced them to record the beatings, according to multiple Chinese media.

The man has been detained, and the children are now under the care of their mother. The children suffered non-life threatening injuries, according to The Beijing News.

The beating was recorded in China and later shared on social media on July 12. The reports did not include who shared the video or why it was shared.

The family lives in Lianyungang City of Jiangsu Province. The father, surnamed Ge, 36, was said to not only beat his children, but also his wife and even his parents. The son is 13, and the daughter is 8, according to Chinese online news outlet Cover News.

After driving home from drinking, Ge attacked his wife. When she fled from the house and hid from him, Ge turned his attention to the two children, according to Cover News.

The video shows a young girl in a dress, sitting on the ground. Ge strikes her repeatedly with a large wooden stick, which starts to snap. The girl twists and writhes after each strike, her pained cries following each cruel blow.

Other sections of the video show Ge beating a young boy. The boy squats on the ground, covering his face, as Ge snaps a wooden pole over the boy’s head.

Ge indirectly forced the children to record the process. He told them that if they refused to record each other while being beaten, then he would continue the beating. The children had no choice but to comply.

Beer cans can be seen on the table in the foreground of the video. Ge is a raging alcoholic. He would take to beating his relatives each time he finished drinking, according to The Beijing News.

The beatings were well known in their village, as the local police and government officials spoke with the man on multiple occasions, according to The Beijing News.

“The county government intervened and mediated multiple times, and the local security bureau also spoke to him,” the government official told The Beijing News.

An investigation was opened on July 13.