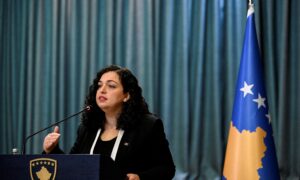 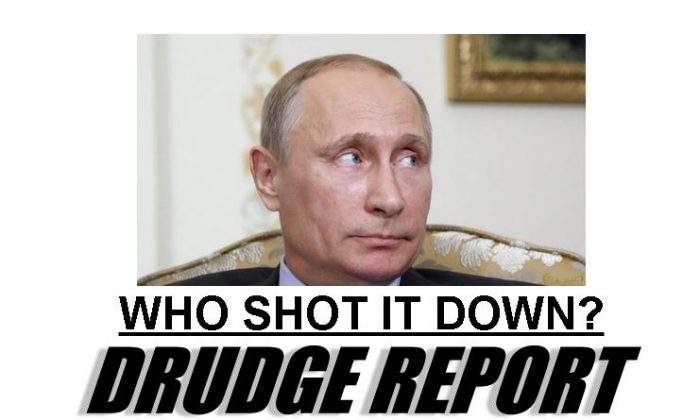 Drudge Report Highlights Question About MH17 Flight ‘Who Shot It Down?’ With a Photo of Putin

The conservative webpage, which provides links to top stories of the day, has as its biggest link a New York Times story that explores who actually shot down MH17 over eastern Ukraine on Thursday.

Igor Girkin–also known as Igor Strelkov–the commander of the Donetsk People’s Army, said shortly after the plane was shot down that his group did it, but that proclamation has been hotly debated.

Some believe that Russia and President Vladimir Putin was behind the attack–the Donetsk group is pro-Russian–while others feel that the Ukraine government may have had something to do with it.

Buk missiles are believed to have been used to carry out the attack. The Donetsk People’s Republic had boasted on June 29 that they took over a Ukrainian military base that had Buk ground-to-air missiles, but wouldn’t say how many, reported the Kyiv Post.

The Buk missiles can travel up to 25 kilometers (15 miles), three times the altitude MH17 was flying.

“The plane has just been taken down somewhere around Torez (Donetsk Oblast). It lays there behind the Progress mine. We did warn you – do not fly in ‘our sky,'” he said through his account on VK, the Russian version of Facebook.

The Progress mine refers to the mining town of about 80,000 people.

The NY Times article says that U.S. President Barack Obama has pointed to pro-Russian separatists in the downing of the plane, which killed all 295 on board.

“Evidence must not be tampered with,” he added. “Investigators need to access the crash site. And the solemn task of returning those who were lost onboard the plane to their loved ones needs to go forward immediately.”

The article says that Obama “resisted blaming Putin personally, saying that the government does not know exactly who fired the missile,” but noted that Obama holds the Russians responsible for failing to stop the violence.

“We know that they are heavily armed and they are trained,” Mr. Obama said. “That is not an accident. That is happening because of Russian support.” He said it is “not possible for these separatists to be functioning the way they are” without Russian support.

Rebels on the ground have told multiple media agencies that they’re not responsible for the attack, though it’s been unclear whether they are part of the People’s Army.