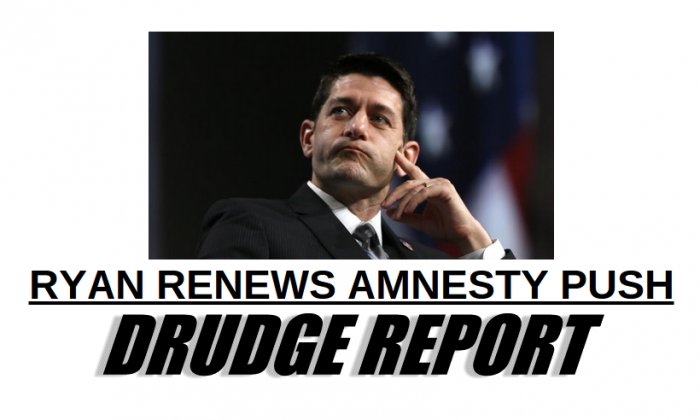 The Drudge Report is highlighting an article that outlines efforts by Republican Congressmen Mario Diaz-Balart of Florida and Paul Ryan to pass an immigration bill before the summer recess starts.

Drudge is a popular conservative webpage that links to various articles.

The article in question was published on Breitbart, a popular political website that skews toward conservatives.

The article says that Ryan and Diaz-Balart are leading the effort to try to get an immigration bill passed in the few weeks left before the summer recess, and have been joined by a young conservative lawmaker, Rep. Mick Mulvaney of South Carolina.

“Absolutely,” Mulvaney told Breitbart. “I have been talking about immigration with my colleagues for months. Talking about important issues is part of my job.”

However, he added that he isn’t “whipping’ support for a bill per se, and that he remains opposed to the Senate “Gang of Eight” bill.

“I have absolutely no interest in taking up the Senate bill or going to conference on the Senate bill. Securing our borders is my first priority on any immigration reform, and the Senate bill falls woefully short on that point. Furthermore, I will not support a special pathway to citizenship for those who are here illegally. The Senate bill has always been and remains a non-starter,” Mulvaney said.

The article notes that Mulvaney recently said that there’s millions of illegal immigrants here and that it needs dealt with.

“Congressman Ryan has laid out his principles for immigration reform. He’s said that the House should not take up or conference with the Senate bill and that there should be no special pathway to citizenship for those here illegally. Congressman Ryan has also said that any reform effort should begin by securing our border and enforcing our laws.”