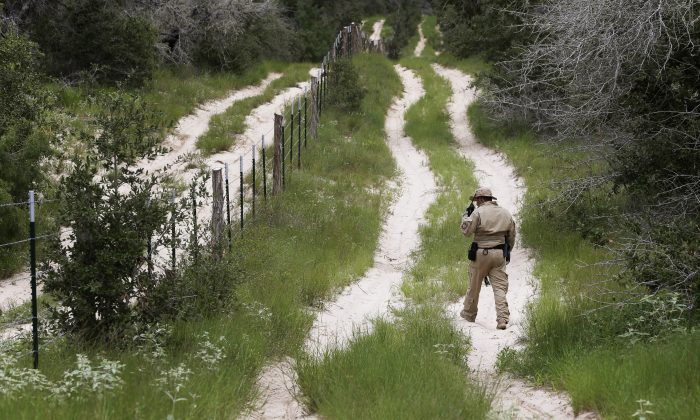 FILE - In this Sept. 5, 2014 file photo, a U.S. Customs and Border Protection Air and Marine agent looks for signs along trail while on patrol near the Texas-Mexico border near McAllen, Texas. President Barack Obama, who has postponed until after Election Day his plan for executive actions that could shield millions of immigrants from deportation, is already on pace this year to deport the fewest number of immigrants since at least 2007, according to a new analysis of Homeland Security Department figures by The Associated Press. (AP Photo/Eric Gay, File)
News

The Times report states conservative politicians have warned that militants are planning to cross the border and launch car bomb attacks.

The officers have been placed on a heightened state of alert and a US base near the border has increased security measures.

Conservative groups and Republicans have said that ISIS and extremis s from Iraq and Syria are looking to cross the US-Mexico border illegally. But the FBI, Homeland Security, and other officials are saying there’s no threat.

“There is no credible intelligence to suggest that there is an active plot by ISIL to attempt to cross the southern border,” Homeland Security officials stated.

“There’s a longstanding history in this country of projecting whatever fears we have onto the border,” Representative Beto O’Rourke, Democrat of Texas, told the Times. “In the absence of understanding the border, they insert their fears. Before it was Iran and Al Qaeda. Now it’s ISIS. They just reach the conclusion that invasion is imminent, and it never is.”

This week, Rep. Trent Franks, a Republican from Arizona, issued a statement that ISIS could be in Ciudad Juarez, Mexico, near El Paso, Texas.

“It is true, that we know that ISIS is present in Ciudad Juarez or they were within the last few weeks,” Franks reportedly said, according to AZCentral. “So there’s no question that they have designs on trying to come into Arizona. The comment that I’ve made is that if unaccompanied minors can cross the border then certainly trained terrorists probably can, too. It is something that is real.”

And on Sept. 10, Arizona Sen. John McCain expressed his concerns about the matter.

“The fact is there are thousands of people who are coming across our border who are undetected and not identified, and for you to sit there and tell me that we have the capability or now have the proper protections of our southwest border, particularly in light of the urgings over Facebook and Twitter [by ISIL] for people to come across our southwestern border, is a great concern to the citizens of my state,” he said, according to the Washington Free Beacon.