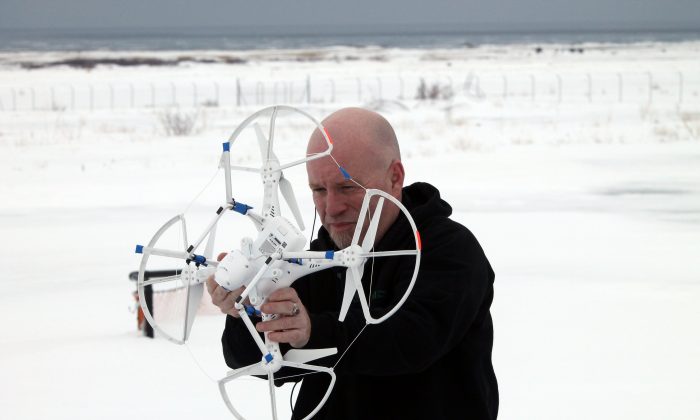 Jeff Ducharme prepares a state-of-the-art DJI Vision 2 drone for flight during a class at the College of the North Atlantic in Stephenville, N.L. (Courtesy Stephen Winsor)
Canada

Drone Journalism Moving Ahead in Canada

The use of drones in journalism is only in the beginning stages in Canada, but it is expected to surge ahead as the technology becomes more accessible and restrictions are loosened.

This year, Langara College in Vancouver and the College of the North Atlantic (CNA) in Stephenville, N.L., became the first schools in Canada to teach journalism students how to gather news using drones.

Jeff Ducharme, an instructor at CNA, has led the charge for drone journalism in Canada, starting a class in January as part of his photojournalism course. With some media outlets around the world already using the technology for newsgathering, Canada needs to get on board, he says.

“If you wait until something becomes accepted and then decide to delve into it, it’s too late. We should be ahead of the curve, not behind it,” says Ducharme.

In recent years the unmanned aerial vehicles (UAVs), or quadrocopters, have been put to use in Canada for everything from wildlife research and real estate marketing to agri-business and mine exploration, doing jobs referred to by aficionados as the “3 D’s”: dull, dirty, or dangerous.

However, drone operators need a permit from Transport Canada for commercial use. Since journalists are in the commercial use category, they must apply for a special flight operations certificate, which is granted on a case-by-case basis. To get the certificate journalists must provide a detailed flight plan and demonstrate that the risks of operating the drone are “managed to an acceptable level.”

After the application is filed it’s a minimum 20-day waiting period—far too long for most journalists covering breaking news. In addition, some insurance companies may require operators to be licensed pilots before they can be covered.

This is why the future of drones in journalism will depend on how it is regulated, says Ducharme.

Transport Canada recognizes that UAV systems are a rapidly emerging sector, says spokesperson Roxane Marchand, and they are seeking recommendations from key industry stakeholders with a view to introducing new regulations and standards.

“Canada and the United States are also seeking greater alignment in their regulatory approaches,” she said in an email.

The U.S. currently bans drones for commercial use but is expected to introduce wide-ranging regulations sometime next year.

Although news outlets have used aerial photography for more than a century through helicopters and other piloted aircraft, remotely controlled drones are the first widely accessible technology. As they become cheaper and easier to use, UAVs are expected to reach a mainstream commercial market.

“Only the largest news organizations have access to a helicopter. A helicopter costs around roughly $1,000 an hour. For a good drone, you’re talking anywhere from $1,500 to $5,000 [total]—it pays for itself quicker,” says Ducharme.

Drones have been used in all aspects of newsgathering, but because they can go where humans can’t, they are particularly desirable for covering natural disasters or conflicts. At the Sochi Olympics, they were used to get dramatic aerial shots of skiers and snowboarders.

Most of the drones currently suitable for journalism are about the size of a medium to large pizza box, but the technology is evolving quickly and some emerging systems are small enough to fit in the palm of a hand, allowing them to be easily carried in a journalist’s backpack. Some have compared the skills needed for flying the drones to that of playing a video game.

Ducharme notes that the course he teaches focuses much more on the ethics and law of drone reporting than technical operation. Drones should never be considered a replacement for actual journalistic work, he says, but it gives journalists another tool in their arsenal.

Ian Hannah, a Gemini Award-winning producer whose company Avrobotics uses drones to shoot video for a variety of industries, says he believes that in the not-too-distant future, drones will be an important part of journalism in Canada.

“Its potential for newsgathering and reporting is game changing,” he says, adding that it will require a change in mindset and a new set of skills for journalists.

“It’s a brave new world where new technology and reporting converge to create not just aerial pictures, but data and real information.”

However, the use of drones in journalism raises a number of ethical and policy considerations, ranging from air safety and liability to privacy concerns. How to regulate “airborne paparazzi” stalking a celebrity, for example, or prevent a drone from crashing into a crowded city street, which has happened.

According to a report published by Oxford University on the future of drones in journalism, the most critical factor to be addressed is how to balance regulations so media can use UAVs effectively while maintaining the safety of public air space.

But Ducharme’s biggest concern is not regulated journalists who have a lot to lose by disobeying the rules—it’s the unregulated, rogue drone operators flying UAVs for fun or sport. Virtually anyone with a few hundred dollars can get access to a drone; there are dozens of stores that sell the technology and several online communities have popped up dedicated to open-source drone research and development.

In addition, no dedicated spectrum has yet been assigned to UAVs, making their wireless systems potentially vulnerable to hacking and their flight path alterable. At a triathlon in Western Australia on April 6, a triathlete was allegedly struck by a falling drone and suffered head injuries. The videographer operating the device claimed someone had hacked into it—potentially any spectator at the event who owned a smartphone, he surmised.

As policymakers iron out the rules around drone use, Ducharme will continue to prepare his students for a drone-friendly future.

“The students are really excited about this technology,” he says. “It’s very exciting for them to be part of it, just to be thinking about it, and that they’ll hopefully be able to use this at some point down the road.”