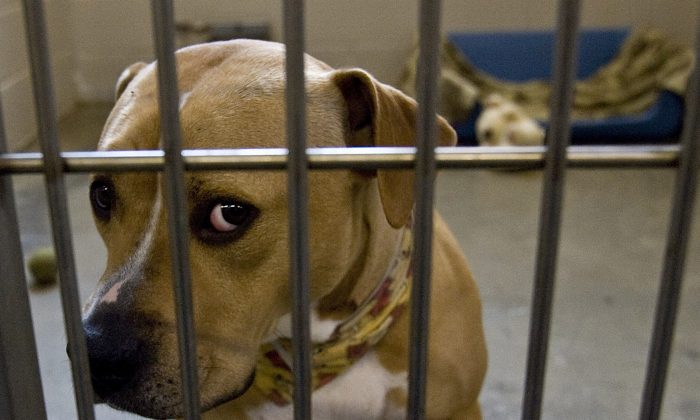 File photo of a dog. (Photo by David Paul Morris/Getty Images)
US News

Hundreds of dogs to be used in research are being kept in dirty, overcrowded, and “barbaric” conditions at a Virginia breeding facility, according to an animal rights group whose drone footage has since gone viral.

The drone video was captured by the animal rights group SHARK—Showing Animals Respect & Kindness—over two days from June 29 to June 30. It shows hundreds of beagles kept in the Covance Research Products facility in Cumberland.

“The first thing you notice is the endless crying, and wailing, and barking. Terribly, terribly sad,” said, Stuart Chaifetz, one of the SHARK investigators who shot the footage.

Covance which was owned by LabCorp at the time of filming, raises “thousands of dogs” for research purposes, according to PETA.

“These cages were filthy. There were feces and urine all over it. We actually filmed one dog eating, you know, some of it,” Chaifetz told KSN.

The clip, which has been viewed over 67,000 times since it was published on July 10, has sparked concerns over the treatment of the animals.

The dogs appear to be under immense stress, displaying signs of dominance in their unnatural, overcrowded, and miserable living conditions, a member of the SHARK team says in the YouTube video.

Several dogs can be seen showing stereotypical or repetitive behavior, which the SHARK member describes as an indicator of an unhealthy mental state for the animals relative to their living environment.

At least two dogs in the clip are walking around in circles, repetitively. Another part of the video appears to show a dog eating feces on the floor.

“When you saw this almost ‘Lord of the Flies’ situation where you had so many dogs packed together, these conditions were truly barbaric,” Chaifetz said.

The dogs’ cages are riddled with feces, and urine stains are visible on the concrete immediately outside where the animals are living.

The beagles were filmed as they climbed on top of each other and fought among themselves in the overcrowded cages.

This month, Covance was acquired by an animal testing and breeding company named Envigo—after the drone footage was captured, reported KSN.

LabCorp, which provides diagnostic, drug development and technology-enabled solutions, told 8News in a statement Covance “takes very seriously our ethical and regulatory responsibilities to treat research animals with the greatest care and respect.”

“The Cumberland site, which was recently sold to a new owner, has a strong track record of compliance and accreditation for animal welfare.”

“Federal law and regulatory agencies worldwide require that animal research be conducted to make sure new medicines are safe and effective for patient use.”

The company added that SHARK’s footage “provides an incomplete picture of the habitat provided in that it only shows the outdoor portion of the runs.”

“The animals have open access to runs and inside kennels, providing ample and comfortable space, bedding, enrichment toys, and water for the number of animals in each area.”

Covance’s Cumberland facility passed its most recent inspection two years ago, according to 8News, who analyzed records from the United States Department of Agriculture (USDA).

However, Covance was hit with a fine of $8,720 in 2006 after an undercover investigation by PETA found that monkeys were being abused at a monkey lab in Virginia. The monkeys were choked, hit, screamed at and sprayed with pressurized hoses by workers at the facility, according to PETA.

Covance was also made to pay a $32,500 fine in 2016 after 13 macaque monkeys died when workers failed to fix broken thermostats.

It is not yet clear whether the USDA will conduct an investigation into the treatment of the beagles, but it told 8News it had seen the drone footage.