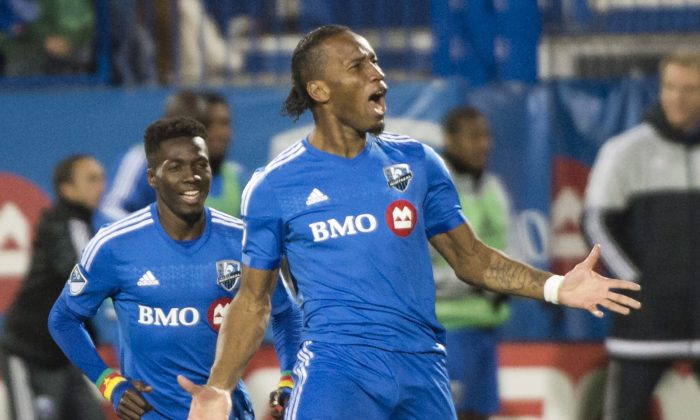 Didier Drogba celebrates after scoring against Toronto FC on Oct. 25, 2015 in Montreal on the final day of MLS regular season. (The Canadian Press/Graham Hughes)
Canadian Content

MONTREAL—Didier Drogba was at it again.

Just when the Montreal Impact was in dire need of inspiration, their Ivorian superstar gave it to them. His two goals in the span of about a minute gave the Impact a come-from-behind 2–1 win over Toronto FC at Stade Saputo Sunday night.

“The work, the defending, the character, the encouraging…there’s a list of things that go on with this performance.”

The win also got Montreal third place in MLS’s Eastern Conference and a home playoff game against TFC, who finished sixth, on Thursday, Oct. 29.

They came here to see some good football, some goals. They’re happy. And if they’re happy we’re happy.
— Didier Drogba

Drogba’s performances have firmly cemented him as one of the league’s top players and the Impact are a team transformed by his heroics. Not surprisingly, he’s become a fan favourite.

“They deserve this moment. They’ve been supporting us all this season. It’s nice to see them cheering with us in a moment like this one,” Drogba told reporters after the game.

“They came here to see some good football, some goals. They’re happy. And if they’re happy we’re happy.”

Since his first start on Sept. 5, which coincided with Biello’s first game in charge after Frank Klopas was let go after a loss in Toronto on Aug. 29, he has taken the club by the scruff of the neck and Montreal has put up the second best record in MLS.

In nine starts for Montreal, he has scored 11 goals. He has also come off the bench twice, but without getting on the score sheet.

Drogba was chosen as MLS Player of the Month in September for his seven goals and one assist in five starts. With his help, the Impact achieved a club-record six-game unbeaten streak (4–0–2).

Drogba has re-energized its players and given its fans reason to be happy again. He brings a legacy of winning and it’s rubbing off on his teammates.

He was the primary striker with a Chelsea team that won four English Premier League titles; he was top scorer in the EPL twice and was also named Player of the Game in the 2012 Champions League final against Bayern Munich.

Drogba has played in three World Cups and was twice named African Footballer of the Year.

“He brings a lot to the team,” Biello said. “His quality is something, but also his work ethic, his approach, when he transmits his experiences players listen, players react—it’s transmitting throughout the team.

“You got a guy like that that’s conditioned to win.”

That desire to win has been seen on many occasions, but one telling moment took place when Drogba was fouled from behind by TFC defender Ahmed Kantari and had to leave the pitch. Limping noticeably, he re-entered the game and took up a defensive role, barring one notable foray into Toronto territory.

A reporter asked him why he wanted to stay in the game.

“Because I want to win. It’s simple,” responded Drogba.

“He demands the best out of everybody. Whether it’s in training or in games, it doesn’t matter,” said Impact goalkeeper Evan Bush.

Bush spoke about the “Drogba Effect” and how his teammates have elevated their respective contributions.

“It’s different when he demands the best out of you as opposed to some other guy that’s a just a normal guy,” Bush told Epoch Times. “He has credibility behind him so you listen to what he says, but not only that, he lifts your game for you playing with him.”

With the departure of Marco Di Vaio, the Impact knew they had a void to fill. The club needed a talismanic player.

“We said at the start of the season we were missing a real striker and voilà Drogba’s there,” said central defender Laurent Ciman. “We can count on him in the difficult moments.”

A clinical striker greatly helps a club to have success. And being clinical separates the world-class strikers from the pack.

“He’s so dangerous in the box,” said midfielder Dilly Duka. “We have a quality player on our team and we just need to give him the right ball so he can make that impact.”

Drogba provided the perfect finish on two crosses—two deft touches that many a striker could get wrong. Drogba is more than capable of scoring with both feet and his head. He’s a threat from free kicks as well, winning a crucial road game in Colorado on Oct. 10 with a trademark strike.

At the end of the regular season and with 11 appearances under his belt Drogba briefly reflected on his time in MLS. The comparisons with the English Premier League and other European leagues are inevitable, but Drogba feels MLS is making progress.

“MLS is a good league, with some good teams and we can see some good football played here, but if this league wants to be one of the best in the world in the next few years I think there’s a lot of things to improve,” he said.

Drogba pointed to the travel and artificial surfaces specifically. However, MLS is a unique league played across three time zones and in very different climates from the cold of Montreal to the heat and humidity of Texas during March to December. Despite the parity in the league, teams generally have very strong home records, no doubt partly due to the travel involved.

“When you want to compare this league to the English one, to the French, to the Spanish, to the big leagues, it has lots to do, but I think the league is on the way,” Drogba said. “Soccer-specific” stadiums with natural grass surfaces would go a long way to bridging the gap.

But for now, Drogba and the Impact must keep their focus on TFC and MLS Golden Boot winner Sebastian Giovinco. Drogba and Giovinco met prior to the game.

“I know Giovinco from the time he was in Juventus and I was in Chelsea playing against them,” Drogba said. “We met a few times outside football.”

The TFC striker ran the Impact ragged in the first half and set up Jozy Altidore’s goal just before half time.

“He’s a good guy. He’s a player we need to keep an eye on him and I hope next game he’s not going to play!” Drogba said with a smile.