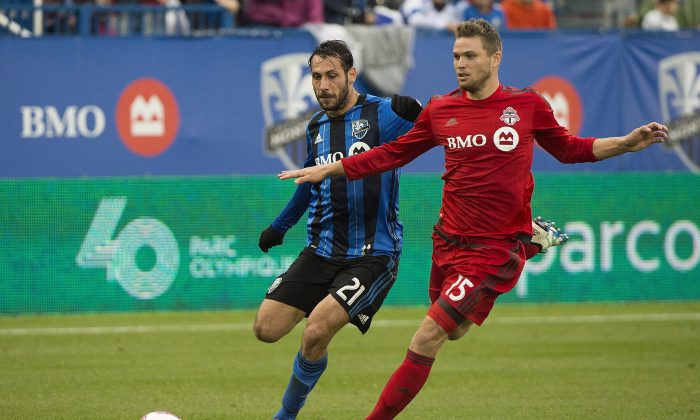 MONTREAL—After a pulsating 2–2 draw between the Montreal Impact and Toronto FC at Stade Saputo on Sunday, Didier Drogba’s absence garnered far more interest than did the hosts qualifying for their third MLS playoffs in five years.

After an extended delay prior to his post-match press conference, Impact head coach Mauro Biello began by explaining why he dropped the former Chelsea FC legend. Simply put, Drogba wouldn’t accept the fact that he wasn’t starting against archrival TFC.

“I had to protect my team,” Biello said. “I have 28 other players to think about. I want to avoid distractions for my players.”

After the game, Drogba tweeted his congratulations to the Impact. It remains to be seen what role he will play after the club looks into the situation.

TFC head coach Greg Vanney said he was surprised not to see Drogba in the lineup.

It had been raining all day, but it absolutely poured just prior to the match as if to signify the chaos that might be going on in the Impact locker room. However, as the game started, the rain stopped and the Impact came out and played a terrific first half of football.

Drogba going AWOL was, in fact, not a distraction to the team, although as the game wore on, the Impact could have used his help in protecting a 2–1 lead. The team was not able to maintain its superiority over TFC who clawed back twice.

In Biello’s analysis, the team is better with Matteo Mancosu up top as he is more active than the 38-year-old Drogba and puts opposing backlines under pressure. The Italian Mancosu also helps the team transition quickly.

Biello called Drogba “an excellent tool” to have coming off the bench.

This year, Montreal clearly has a worse record when Drogba plays, either starting or subbing in. When Drogba is not in the lineup, the Impact have a 6–2–3 (W–L–T) record and when he plays, the record slumps to 5–8–9.

I have 28 other players to think about.
— Mauro Biello, Montreal Impact

Last season, his impact was remarkable. The Ivorian appeared in 14 games (including playoffs) and scored 12 goals. At that pace over a 34-game regular season, Drogba would have scored 29 goals, which would be an MLS record. His arrival gave the team the boost needed to get out of the doldrums and finish in third place.

This year, his production has tailed off—10 goals in 22 appearances. A reluctance to play on artificial surfaces meant the Impact could not rely on Drogba to be their go-to guy. Drogba didn’t get his first start until the seventh game of the season—the Stade Saputo home opener against TFC.

Accordingly, Montreal’s attack has been running through Ignacio Piatti.

The Argentine took the baton at the start of the year and began setting the league on fire. Now with 17 goals, he’s third in league scoring and deserves MVP consideration.

Piatti was brilliant against TFC, scoring two goals. His first goal was a classic left-sided midfielder’s goal, cutting in and firing home at the far side of the goal. He leads by example, working tirelessly when he doesn’t have the ball, and terrorizing defenders when he runs at them. He is excellent in the counterattacking game.

Aside from the Drogba drama, Montreal is battling D.C. United for fourth place and the right to host a play-in game. The Impact could also fall into sixth place and potentially travel to face TFC. Montreal’s draw coupled with DCU’s win over New York City FC means the Impact need to win in New England and hope United doesn’t at Orlando in order to host a play-in game.

Captain Patrice Bernier and goalkeeper Evan Bush aren’t worried about starting the playoffs on the road, however. The Impact have the worst home record of any playoff-bound team, but are more confident than ever about what they can do on the road. Their 1–0 win in Orlando on Oct. 2 was instrumental in putting them in a good position to reach the playoffs.

“We’re probably actually constructed better for road games,” Bush said. “We’re a little better when we draw a deep block, sit, and counterattack a little bit more with the guys that we have.”

“This has probably been our best season away for the last five seasons,” Bernier said. And he’s right, with Montreal just a game below .500 on the road. There have only been five teams since the Impact have been in MLS to have road records over .500.

“Unless you’re first or second, it doesn’t really matter where you are as long as you’re in the playoffs,” Bush said.