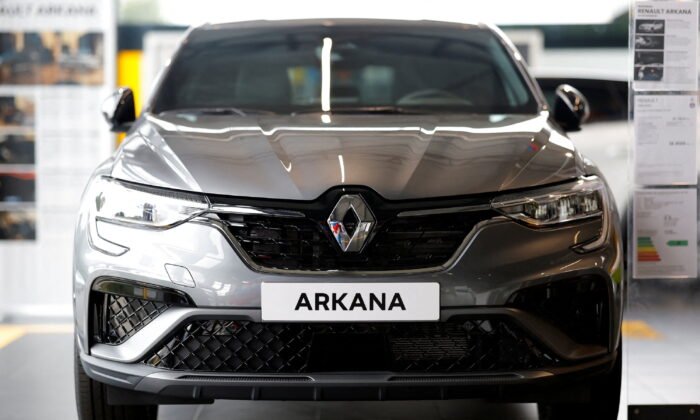 A Renault Arkana car at a dealership in Les Sorinieres, near Nantes, France, on June 7, 2022. (Stephane Mahe/Reuters)
Companies

PARIS—For Emilie Malherbe, choosing the color of her brand new Renault Arkana SUV was easy because only three were available: black, pearl-white, and gray.

She and her husband swiftly settled on gray because what mattered most was getting the car delivered quickly.

“We heard on television that we could face delays of six to eight months to get a new car,” said Malherbe, 41, a resident of the Calvados region in northern France. “I smiled when I was told 30 days. But I got it in 15 days, which was great.”

Facing a global shortage of semiconductor chips and other supply-chain disruptions, carmakers in Europe are offering pared-down options for cars so customers can get a new car before summer vacation season ends.

This is a major reversal for an industry that has leaned heavily on customization, which complicates manufacturing processes and erodes profit.

If they want a car fast, consumers have little to choose from.

Renault’s “Fast track” offer on the Arkana, already being delivered in France, guarantees a new car in a maximum of 30 days—compared with an average wait of five months.

The cars come in only three colors, versus the usual full range of six. Only the single trim level (RS Line) is available and there is but one choice of engine. Fast-track orders accounted for half of Arkana new car registrations in France in June.

If any buyers request additional options, delivery is not guaranteed, according to Renault.

Some major carmakers have talked periodically about the need to get back to fewer options, but have found it hard to follow through.

“The industry has charged up this hill many times,” Betts said. “It’s just not ever been clear how to address the problem.”

“The fear is that if you don’t have data on which versions to eliminate, you could eliminate sales,” he added.

Supply problems and the need to simplify industrial processes to meet the vast cost of electrification may have changed that. “The automotive industry is experiencing a real paradox: on the one hand, it wants to produce on demand rather than ‘pushing metal,’ but reduced product diversity makes it easier for customers to find the models they want in stock,” said S&P Global Mobility analyst Denis Schemoul.

“The reduction in diversity benefits everyone,” he added. “And everyone will follow, even the Germans.” Faced with component shortages, Volkswagen AG in February cut options for its electric ID3, now available in Europe in a single version to shorten delivery times. “The priority of the Volkswagen brand is indeed to provide an offer that can be delivered to its customers as soon as possible despite restrictions linked to the shortage of semiconductors,” VW said in a statement.

The slimmed-down “Up & Go” offer from Renault’s low-cost brand Dacia is focused on engines and trim lines rather than reducing color options.

“By guiding customers to two engines and a single finish, there is no longer an embarrassment of choice … and thanks to this, from an industrial point of view, it is much easier to program, to schedule,” said Dacia logistics and distribution director Dimitri Manoussis.

The program cuts 40 days off delivery times. Dacia says “Up & Go,” which is available in just 14 combinations, accounts for 30 percent of Duster SUV sales in France, while 400 combinations account for the remaining 70 percent. The Duster is Dacia’s second-best selling car.

“If we reduce product diversity, we make a lot of things more fluid,” Manoussis said.

Dacia will roll out “Up & Go” across its entire range and expand it to Belgium, Morocco, and Portugal by the end of the year, followed by the United Kingdom.

Renault’s “Ready to Go” is also good for the carmaker’s margins since the simplified “fast track” Arkana starts at 38,630 euros ($39,348), a similar price to the model’s top trim, the RS Line.

For customers like Emilie Malherbe, who originally wanted a fully loaded RS Line, going for a simpler option was the only way to get a car in time for summer.

More simplification is coming. Stellantis has cut the entry-level version of its new Peugeot 408 and will offer only two trim levels.

“The new 408 focuses on the most requested trim levels,” said Peugeot product director Jérôme Micheron. “This will simplify the customer journey.”

“It is easier and faster to configure your car on our website when there are not too many options,” he added.

By Gilles Guillaume and Joseph White