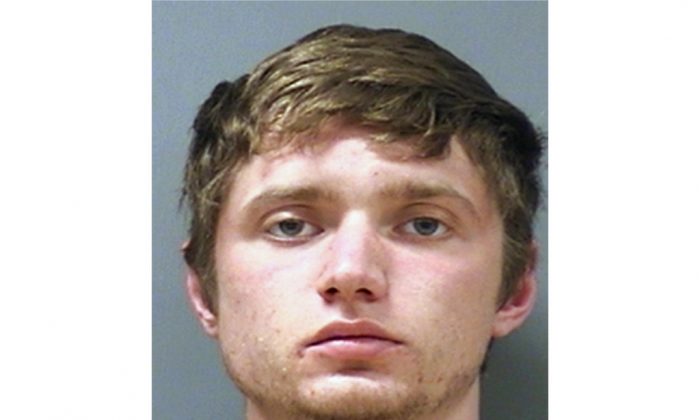 This photo provided by the Chippewa County Sheriff's Office in Wisconsin shows Colten Treu, who is accused of striking and killing three Girl Scouts and a parent and critically injuring a fourth girl who were picking up trash along a rural roadway near Chippewa Falls, Wis., on Nov. 3, 2018. (Chippewa County (Wis.) Sheriff's Office via AP)
Crime and Incidents

A 21-year-old driver was inhaling chemical vapors, or “huffing,” just before he is suspected of striking and killing three Girl Scouts and a woman as they picked up roadside litter on Nov. 3 in a hit-and-run crash, police said on Nov. 5.

Another girl was critically injured in the collision near Lake Hallie, around 90 miles east of Minneapolis. The woman killed was the mother of one of the girls killed, Lake Hallie Police Department said in a statement.

The suspect, Colten Treu, sped off after the crash but turned himself in later after police tracked leaking vehicle fluids from his black Ford F-150 pickup to a home about 2 miles from the incident, police said.

Both Treu and his passenger gave statements that they had been huffing chemical vapors shortly before the crash.

“This is a horrible reminder of our nation’s epidemic of self-indulging with substance abuse without regard of the consequences,” Lake Hallie Police Department Chief Cal Smokowicz said in a statement.

At about 11:40 a.m. on Nov. 3, Treu’s 2-ton truck veered over the center line of a county road, crossed the gravel shoulder and plowed into a ditch where the Chippewa Falls Girl Scouts Troop were doing a highway cleanup project.

All the girls were wearing fluorescent green safety vests and were accompanied by several adults.

Hundreds of community members held a candlelight vigil on late on Nov. 4 outside Halmstad Elementary, the school the victims had attended. Girl Scouts sang songs and a memorial of teddy bears, photos, and balloons was set up.

“Our hearts are broken for the girls and families of the Girl Scouts of the Northwestern Great Lakes,” Girl Scouts of the USA Chief Executive Sylvia Acevedo said in a statement. “The Girl Scout Movement everywhere stands with our sister Girl Scouts in Wisconsin to grieve and comfort one another in the wake of this terrible tragedy.”