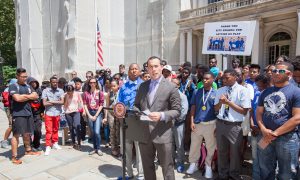 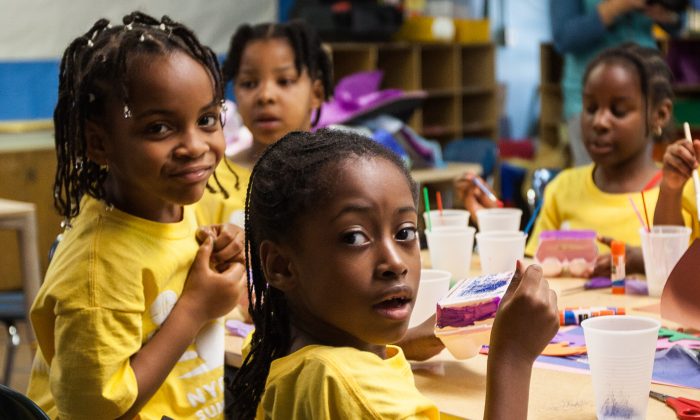 Dreaded Summer School Made Fun for Some

NEW YORK—It was a muggy late Tuesday morning in the Bronx when a group of children overran the school garden of P.S. 154. Yet they weren’t trespassing. To the contrary, they were wrestling the summer learning slump, attending summer school. Or, to be precise, it’s more “fun” alternative—the Summer Quest.

Howsoever disguised as a help for the struggling, summer school locks up some 10 percent of the lowest performing students in classrooms for the better part of the season’s sunny days.

Summer Quest was kicked off three years ago to test whether the dreary experience could be made more palatable as a mix of academics and enrichment, like arts, sports, workshops, and field trips.

And it seems to be working.

“It’s awesome,” said Janke Jagana, a composed 8-year-old in a surprisingly mature voice. “I really like doing this ’cause it’s helping us learn more stuff.”

According to last year’s parents’ survey, 97 percent found Summer Quest a good balance of “fun and learning” and 96 percent felt the program got their children better prepared for the next school year.

“The vision is that we pull away from the traditional summer school where children are coming in and they’re just becoming task masters,” said Jessica Cruz, assistant principal in charge of the Summer Quest at P.S. 154.

She emphasized the need to have children “experience what learning really is and what learning feels like and sounds like,” as opposed to just sitting in a classroom over a worksheet.

And so the youngsters work on their math, reading, and writing, but also get dance classes, do art projects, and tend to their school garden, learning about environment protection in the process.

There are over 2,000 children in the program, more than twice as many as last year. About 15 percent of them have to complete the program to get promoted to the next grade—the rest were signed up by their parents.

Schools have to get a community partner to apply for the program. In the case of P.S. 154, it’s the local YMCA, helping with programming, both the academic and the fun.

The Education Department celebrates the success of the program, but whether it will ultimately replace summer school is not clear as the results of a three-year evaluation period are not in yet.

Summer school itself has been a target of significant changes under the new School Chancellor Carmen Fariña. She nixed a test that used to culminate summer schools and determine whether children would get promoted to the next grade. Now the promotion is based on a portfolio of a student’s work over the summer.

Despite the fun, Janke, who failed math this year, takes the experience seriously. “I didn’t come here to have fun,” she said. “I came here to learn.”