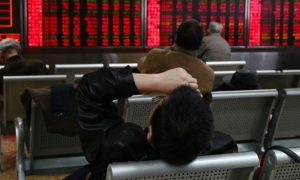 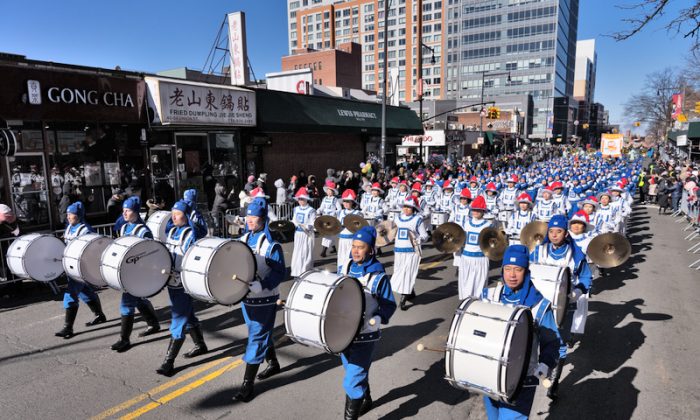 Golden dragons flew through Flushing, hovering low and allowing people to touch their smooth scales as floats carrying heavenly maidens went by, granting the earthly realm a glimpse of their divine finery. It was a magical entrance to the Lunar New Year.

These creatures and divinities make appearances every year to share the celebrations of the annual Eastern tradition with New Yorkers. This year, they celebrate the year of the pig—an animal of good fortune and friendship, but the pig can also be naughty and careless.

Lions danced to ward away negative elements and roused the crowds with majestic glances, making way for friendship and the good elements that bring people of all backgrounds together.

“It is so important that we celebrate the Asian Lunar New Year,” said New York City Council Member Paul Mallone in an interview with The Epoch Times. “The schools this year, the children, they shared their cultures with the non-Asian children … It was beautiful to see.”

And it wouldn’t be a parade if there wasn’t a marching band.

The Sound of Heaven

Drums were booming the sounds of heaven—which is what you would expect from the Tian Guo Marching Band: “Tian Guo” meaning celestial in Chinese. It was an orderly wave of blue and white, resembling the sky, with speckles of brass among the clouds.

The marching band heralded the principles of the traditional Chinese meditation practice Falun Dafa: Truthfulness, Compassion, and Tolerance. Banners emblazoned with the three virtues followed—virtues that are followed by millions around the world, from both East and West.

New York Assemblyman Ron Kim underlined the universal appeal of the holiday. “Lunar New Year is no longer just an Asian-American holiday, it’s a holiday enjoyed by all New Yorkers and all Americans,” he said.

Emperors and empresses garbed brilliant outfits and they didn’t look bothered by the wind’s chill. At the same time, as confetti fluttered, giant pigs waved happily at the crowds, being their sociable selves.

Along with the traditional items, outfits, drums, and music, the media was also present—specifically Epoch Media Group. Aboard a float of their own—with two brawny fellows beating away at a giant drum—the reporters wore blue and yellow sashes, branded with the Epoch Media Group’s promise, to deliver truthful, traditional reporting.

Paul Greany, a business manager for NTD said that the group “isn’t politically affiliated, they don’t have any political background—they just tell the truth independently,” setting them apart from other media.

The media group also works toward creating a mutual understanding between the East and the West, which partnered perfectly with the parade, like chopsticks and rice. One reporter shared a crucial element of their mission: the point where it all began.

“I think NTD and the Epoch Times are working very hard to expose the human rights abuses and persecution in China,” said NTD reporter Jeremy Sandberg, referring to the persecution of spiritual practices, such as Falun Dafa, by the Chinese Communist Party.

The final section of the parade were Falun Dafa practitioners, dressed in gold, who bid the crowds farewell and good vibrations with a beating of the drums. It was a spirited crowd, celebrating a traditional holiday, but unfortunately the heavenly maidens and golden dragons could stay in this earthly realm no longer.

But they did not leave without paving the path to a year of friendship and good fortune: the year of the pig.