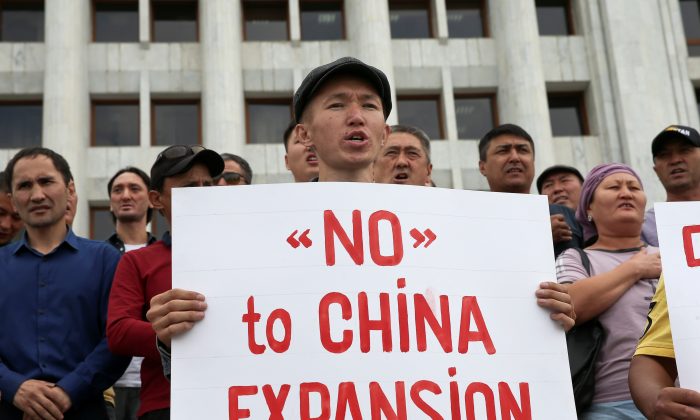 People protest against the construction of Chinese factories in Kazakhstan during a rally in Almaty, Kazakhstan on Sept. 4, 2019. (Pavel Mikheyev/Reuters)
Asia & Pacific

ALMATY/NUR-SULTAN—Kazakhs protesting against the construction of Chinese factories held public rallies in three Kazakh cities on Sept. 4, demanding a ban on an initiative which the Central Asian nation’s government hoped would bring investment and jobs.

Neighboring China is already one of the oil-rich former Soviet republic’s biggest investors and trade partners, but its broad presence and Beijing’s campaign to “de-radicalize” ethnic minorities in the Xinjiang region have contributed to a growing anti-Chinese sentiment.

The protests first started in the small industrial town of Zhanaozen in Western Kazakhstan on Sunday as about 100 people gathered to demand a ban on what they described as plans to move outdated and polluting Chinese plants to Kazakhstan.

On Monday, the crowd grew to more than 300 people, according to local newspaper Lada. Speaking to the protesters, regional governor Serikbai Trumov said there were no such plans—although the government has said it was discussing a number of investment projects with Chinese companies.

But rallies continued on Wednesday, widening to include the capital, Nur-Sultan, and the country’s biggest city, Almaty.

In Almaty, about 30 people gathered outside the mayor’s office holding banners such as “No Chinese plants” and singing the national anthem. In Nur-Sultan, about two dozen people rallied at one of the central squares, displaying banners with similar messages.

China is a major investor in Kazakhstan’s energy sector and buys oil and gas from the mostly Muslim nation of 18 million, but critics accuse some Chinese companies of hiring too few local staff and paying them less than foreign workers.

Also driven by anti-Chinese sentiment was a series of protests in 2016 against a planned land reform which its opponents said would have allowed foreigners to scoop up huge swathes of Kazakh farmland. The reform was shelved.

Beijing’s “de-radicalization” drive in Xinjiang, which according to human rights groups has landed a million people, including some ethnic Kazakhs, in prison-like camps, has also been a source of tension.

Last March, Kazakhstan arrested a leading campaigner against the camps, charging him with hate speech. A local court set him free in a plea bargain last month.

By Pavel Mikheyev and Tamara Vaal