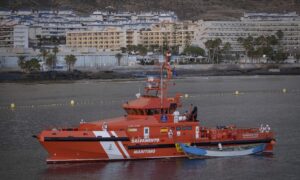 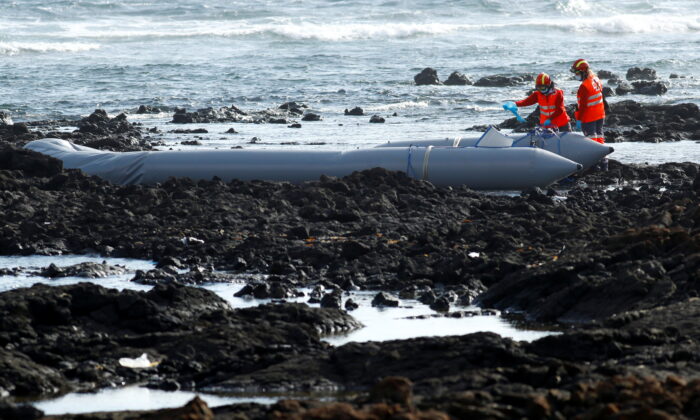 Rescue workers search for bodies after a boat with 46 migrants from the Maghreb region capsized in the beach of Orzola, in the Canary Island of Lanzarote, Spain, on June 18, 2021. (Borja Suarez/Reuters)
Europe

Dozens of Migrants Rescued, Four Dead After Boat Runs Aground on Spain’s Lanzarote

LANZAROTE, Spain—More than 40 African migrants were rescued after their boat ran aground on the rocky coast of Lanzarote in Spain’s Canary Islands late on Thursday, emergency services said, while over 100 people on two more boats made it safely to other islands.

Rescue workers pulled the body of a young boy out of the ocean on Friday afternoon, bringing the total death toll to four, while police divers were preparing to begin searching for one person who remains missing.

The bodies of a man and two women, one of whom was pregnant, had been recovered earlier in the day, an emergency services spokesperson said.

Local resident Marcos Lemes, who was first on the scene and alerted emergency services, told Reuters he had begun pulling people out of the water after giving his phone to a boy to use as a torch.

“I ran out of the house with two buoys that I keep at home and when I got there it was madness … I saw a huge number of people on the reef.”

A dozen of the rescued group, including two babies and two young children, were transferred to hospital, the regional emergency services said.

Another boat carrying 58 people made it to Fuerteventura and a third with 52 people landed on the tiny island of El Hierro.

So far this year more than 5,700 migrants have made the dangerous crossing from Africa to the Canaries archipelago, over twice as many as in the same period in 2020, which itself saw an eightfold increase from 2019.

A record 850 died on the route last year, according to the United Nations migration agency.