‘Down With the Communist Party’: Chinese Student Stands up to Regime, Then Disappears 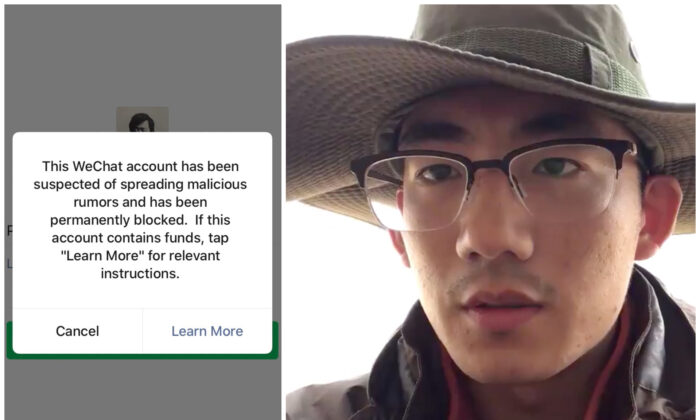 L: Zhang Wenbin's blocked WeChat account. R: Zhang speaks in a video on social media on March 30, 2020, calling on the ruling Chinese Communist Party to step down. (Screenshots via Twitter)
By Eva Fu

A college student in China has gone incommunicado after he publicly called for the country’s ruling Communist Party to relinquish power.

“Down with the Communist Party,” Zhang Wenbin, a college senior and programmer from China’s northeastern Shandong Province, said in a March 30 video on Twitter, a platform blocked in China. The student used a VPN, a tool used by Chinese citizens to access overseas websites censored by the regime’s internet firewall.

The student wrote in another tweet on March 30 that the police had already summoned him for the Wechat post, and he would soon be detained for five days. He hasn’t made any more posts since then. On March 31, he was no longer accessible.

Zhang’s disappearance comes as the regime has escalated its clampdown on dissenting voices amid its attempts to stifle domestic criticism of its mishandling of the CCP virus outbreak. Recently, Chinese tycoon Ren Zhiqiang went missing after he criticized the regime’s response to the outbreak and called for freedom of speech.

Chinese censors have permanently blocked Zhang’s WeChat account on suspicion of “spreading malicious rumors,” according to a screenshot Zhang posted. He said that Weibo and Qzone, two other social networks created by Chinese tech firm Tencent, were also not functioning properly for him.

“I was also once a ‘Little Pink’ [a term to describe youths indoctrinated by the regime] … and only after getting through the [Great Firewall] did I come to recognize the Party’s sinister face,” Zhang said in the March 30 video.

He said that “seeing people of Hong Kong and Taiwan courageously resist” the Chinese Communist Party (CCP) over the recent months had inspired him to be more vocal in the hopes of helping the Chinese people see the ruling regime for its “true colors,” and “push down the wall lying in front of us.”

“Maybe I won’t live to see the day the CCP falls, nor do I know if anyone will see this video, but regardless, I have been to this world,” he said.

Yang Jianli, founder of the Washington-based advocacy group Citizen Power Initiatives for China, said that Zhang was merely exercising his freedom of speech—a right granted by the Chinese constitution.

But this right has remained only “on paper,” Yang said.

He called the CCP a “barbarian regime” that views maintaining its power as the top priority.

“The CCP’s party-state does not tolerate challenge from anyone, nor do the Party leaders,” Yang told The Epoch Times. “Any challenging remarks would seem like an act of rebellion to their eyes.”

Awakening, and a Desire to Speak Out

Shortly before his disappearance, Zhang described to The Epoch Times in an interview on March 30 how he came to openly criticize the Chinese regime.

It began about four years ago with Zhang circumventing China’s internet firewall to read unfiltered information, and learning about the 1989 student-led pro-democracy protests in Tiananmen Square, which the regime crushed the protesters with tanks and troops. The incident has since become a taboo topic in the country, with words referencing the incident swiftly removed from the internet, while those who speak out about it are punished.

From there, Zhang began to uncover the regime’s sprawling network of lies piece-by-piece, from the devastation wrought by its stringent one-child policy—a drastic state birth control law that the government said averted 400 million births—to its persecution of faith groups such as Falun Gong, and repression in the regions of Xinjiang and Tibet.

He visited Hong Kong and Tibet to meet the locals, and came back comparing what he saw on the ground with how the government portrayed them.

“I realized that they have been lying throughout,” he said. “It’s no longer just what I learned from the internet, a lot are facts I saw first hand.”

Zhang had largely kept these reflections to himself. But last October, Zhang took action to express support for the pro-democracy protesters in Hong Kong.

He shared a Hong Kong protester-initiated campaign on WeChat, calling for people to support the movement by posting selfies with one hand covering their right eye. However, soon after he heard that police summoned his schoolmate for posting pro-Hong Kong remarks on social media. He immediately deleted his account.

“I was rather cowardly at the time,” he said.

Still, the censors didn’t let him off the hook. Recently, he searched for a few “sensitive” keywords on Weibo, a Twitter-like platform, including “we can’t, we don’t understand,” a hashtag that began trending in the wake of whistleblower doctor Li Wenliang’s death. Li was initially silenced for speaking out about the burgeoning outbreak in Wuhan, then died of the virus he warned others about.

Not long after this, he began having trouble commenting, sharing, or messaging on the platform. He ended up deleting the app in frustration.

“What repulses me the most is how the CCP blindfolded the public by indoctrinating them with lies. They have jailed them behind the high walls,” he said.

Zhang has several good friends from high school who he said have bought into the state’s propaganda and would not accept any differing views. They, along with many of his other classmates will eventually become teachers, instilling the same mindset into the next generation, he said.

“Brainwashing is probably what the CCP has been most successful at,” Zhang said.

His parents have warned Zhang that he had made a “mistake” by speaking out. But still, the student remained defiant.

“I didn’t do anything wrong, why can’t I be allowed to speak?”