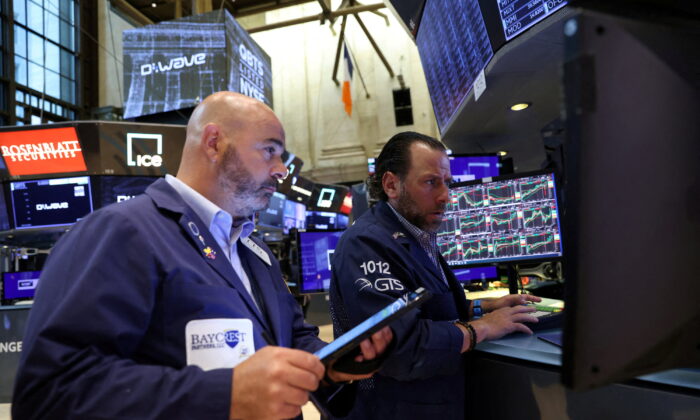 NEW YORK—The Dow and S&P 500 rose on Tuesday as stronger-than-expected results and outlooks from Walmart and Home Depot bolstered views on the health of consumers, while technology shares declined and weighed on the Nasdaq.

The S&P 500 also came close to breaking above its 200-day moving average, a key technical level. The benchmark index has not closed above that level since early April.

At the same time, the 10-year U.S. Treasury yield rose, weighing on technology and other high-growth stocks. Shares of Microsoft Corp. were down 0.3 percent on Tuesday after recent gains.

After a harsh first half of the year, the S&P 500 is up nearly 14 percent since the start of July, helped in part by better-than-expected earnings from Corporate America.

Investors have also been optimistic lately that the Federal Reserve can achieve a soft landing for the economy as it tightens policy and raises interest rates to reduce decades-high inflation.

“When you transition from a bear market to a bull market, especially one where the Fed is raising rates and there are concerns over the consumer, you really want to see consumer discretionary underpinned by enthusiasm. And today’s move in discretionary names is positive for the market,” said Quincy Krosby, chief global strategist for LPL Financial in Charlotte, North Carolina.

Walmart in July slashed its profit forecast amid surging prices for food and fuel.

With results in from the majority of S&P 500 companies, second-quarter earnings are expected to have risen 9.7 percent from a year earlier, compared with 5.6 percent estimated on July 1, according to IBES data from Refinitiv.

Still, investors will be anxious to see July U.S. retail sales data, which is due on Wednesday as well. Also on Wednesday, the Fed is scheduled to release minutes from its July policy meeting.

Investor sentiment is still bearish, but no longer “apocalyptically” so, according to BofA’s monthly survey of global fund managers in August.

Volume on U.S. exchanges was 10.92 billion shares, compared with the 10.96 billion average for the full session over the last 20 trading days.

Advancing issues outnumbered declining ones on the NYSE by a 1.22-to-1 ratio; on Nasdaq, a 1.21-to-1 ratio favored decliners.