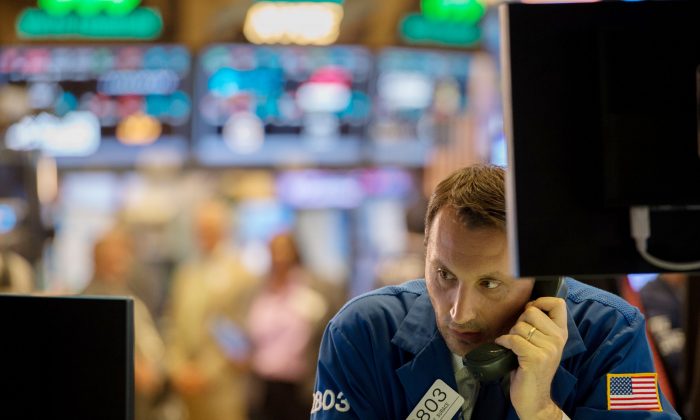 A trader works on the floor of the New York Stock Exchange at the closing bell of the Dow Jones Industrial Average on June 8, 2017. (Bryan R. Smith/AFP/Getty Images)
Stocks

The Dow Jones Industrial Average lost 1,297 points, or 3.8 percent, on May 5, one day after the market rallied to the Fed’s raising of interest rates, with stocks suffering their worst losses of 2022 and one of its worst days since the start of the pandemic.

The day’s massive tumble completely reversed the market’s gains from the May 4 rally, further deepening the losses for 2022, with the S&P 500 falling 3.56 percent and the Nasdaq Composite falling 4.99 percent.

The S&P 500 and Nasdaq Composite had hit the lowest levels at the beginning of the week after poor April results, as some areas of the market were oversold, priming it for a short-term bounce.

The Nasdaq Composite also jumped 3.19 percent on May 4, but all of those gains were erased the following day.

The May 4 rally was sparked by comments from Federal Reserve Chairman Jerome Powell, who said the central bank was “not actively considering” hiking its benchmark interest rate by 75 basis points at its next meeting, which immediately sent stocks higher and the dollar and Treasury yields lower.

However, Powell’s moderate approach still promises more consecutive 50-basis-point rate hikes, and he said that it would take a cooling of skyrocketing inflation or deterioration in the jobs market before the central bank would act to slow down the pace of rate increases.

It is anticipated that the Fed will increase interests rates by 50 basis points at its next two meetings.

Michael Reynolds, vice president of investment strategy at Glenmede, told MarketWatch the Fed is planning to shrink its nearly $9 trillion balance sheet starting in June, particularly if the economy enters the late stage of an expansion.

The Treasury market on May 5 also saw a major reversal from the previous rally, with 10-year Treasury yields, which move opposite of prices, rising back above 3 percent today to its highest level in four years.

Some economists predict that the U.S. economy is heading for a downturn, with sectors like housing and autos already showing signs of weakness due to their sensitivity to interest rates.

The S&P 500 saw a major sell-off, with more than 80 percent of stocks taking a hit, including normally well-performing stocks like Chevron Corporation, The Coca-Cola Company, and Duke Energy Corporation, which all witnessed relatively minor losses.

Some Wall Street economists are still hopeful that the markets will see a relief rally after the May interest rate increase, since the Fed chairman’s comments have eased many investors’ concerns about the central bank’s ability to slow inflation without triggering a recession.

The Labor Department’s May 5 report on weekly jobless claim numbers showed a slight increase of 19,000 for a total of about 200,000, but labor productivity figures for the first quarter of 2022 reported their worst results since 1947, with a 7.5 percent annual rate increase.

Unit labor costs jumped at an 11.6 percent annual pace in the first quarter.