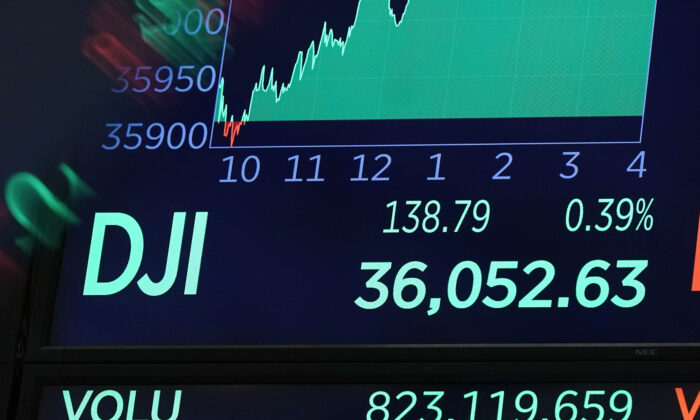 A board above the trading floor of the New York Stock Exchange shows the closing number for the Dow Jones Industrial Average on Nov. 2, 2021. (Richard Drew/AP Photo)
Markets

The Dow Jones Industrial Average (DJIA) dropped over 1,000 points on Monday as stocks extended their three-week declines before making a same-day turnaround minutes before closing time.

At its lowest point on Monday, the market was on track for its worst day since October 2020, with the DJIA down more than 1,000 points before making an apparent recovery, closing 0.3 percent, or 99 points, higher.

The S&P 500 index, the broadest measure of the U.S. equities market, closed with a gain of 0.3 percent after plunging roughly 4 percent during the day.

Meanwhile, the tech-heavy Nasdaq index, which at one point saw a decline of nearly 5 percent, closed trading 0.6 percent higher at 13,855, marking the first time since November 2008 it has made such a come back to end higher within the day.

The price of oil and bitcoin also fell, as did the yield on 10-year Treasury notes, indicating growing investor concern over the current and potential future state of the economy amid flaring tensions between Russia and NATO members over Ukraine and ahead of the Federal Open Market Committee meetings on Tuesday and Wednesday.

While the Federal Open Market Committee, the Fed’s monetary policy panel, is not expected to raise interest rates on Wednesday, they will decide on the next steps for U.S. monetary policy in the face of persistently high inflation.

Inflation in the United States climbed by 7 percent in the 12 months through December, a level not seen since June 1982, when it hit 7.2 percent.

Goldman Sachs analysts have said they expect that the Federal Reserve will move to tighten monetary policy more aggressively and quickly than the Federal Open Market Committee (FOMC) currently projects.

“The Fed is scrambling to control inflation and markets have gone from expecting a gradual interest rate hiking cycle to an accelerated tightening action until inflation eases. The current Fed pivot has proved disruptive to growth forecasts and that may unsettle many at the Fed,” wrote Edward Moya, senior market analyst at OANDA, in a Monday analysis.

“The Fed needs to send a message they are tackling inflation, but they don’t need to overcommit themselves. The Fed’s best option is to signal they will raise rates by 25 basis points in March and signal another one is coming in May,” Moya said.

Meanwhile, geopolitical tensions at the Ukraine-Russia border have sparked further fear among investors amid concerns that Russia may invade Ukraine, despite the threat of severe sanctions from the United States and its allies.

Russia has amassed tens of thousands of troops along the border, as well as Russia-annexed Crimea and Belarus, prompting the Pentagon on Monday to announce that it is placing 8,500 American troops at a “heightened readiness to deploy” in support of Eastern NATO allies.

On Sunday, the State Department ordered family members of U.S. government employees at the U.S. Embassy in Kyiv to leave the Ukrainian capital amid the ongoing military buildup. It also authorized the voluntary departure of non-essential civil servants on Sunday night.