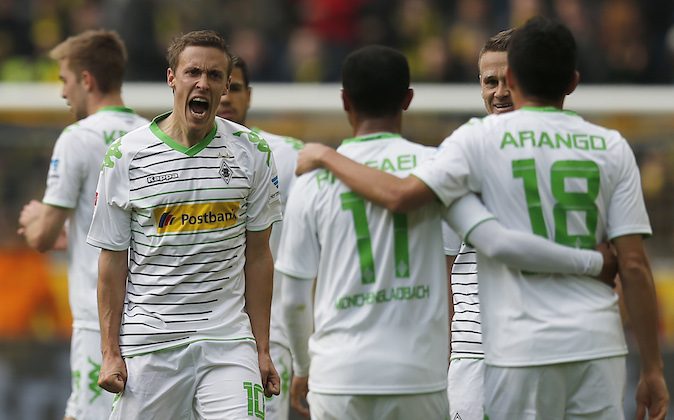 Dortmund Loses to ‘Gladbach at Home, Bayern Close to Title

BERLIN— Ten-man Borussia Moenchengladbach held on for a 2-1 victory at Borussia Dortmund on Saturday, putting Bayern Munich ever closer to the Bundesliga title.

Midfielder Havard Nordtveit was sent off for his second yellow card in the 69th, eight minutes before Dortmund substitute Milos Jojic pulled one back with a deflected shot.

“It shouldn’t happen to us at home,” Dortmund midfielder Nuri Sahin said. “You could see after the sending-off that everyone believed in the equalizer but it wasn’t to be.”

Mainz came from two goals down to win 4-2 at Hoffenheim, Werder Bremen drew 1-1 with Stuttgart, Wolfsburg could only draw 1-1 at bottom side Eintracht Braunschweig, and Hertha Berlin lost 3-0 at home to Hannover.

Dortmund, which hosts Zenit St. Petersburg in the Champions League on Wednesday, was without influential midfielders Henrikh Mkhitaryan and Marco Reus due to suspension and muscle problems, respectively, as ‘Gladbach ended its nine-game run without a win.

“We had a tough time and naturally we’re all relieved,” said ‘Gladbach coach Lucien Favre, who extended his contract on Wednesday.

The visitors nearly went ahead in the 12th when Patrick Herrmann fired narrowly wide, but had to rely on Marc-Andre ter Stegen to save from Mats Hummels shortly afterward. Nuri Sahin was deflected wide from the resulting corner.

Pierre-Emerick Aubameyang struck the crossbar for Dortmund before Herrmann crossed and Raffael bundled the ball inside the right post at the other end.

Kruse scored by drawing Dortmund defender Lukasz Piszczek and goalkeeper Roman Weidenfeller first one way, then the other, before clipping the ball in.

“When you go nine games without scoring then of course it’s a relief,” said Kruse, who was dropped for Germany’s recent game with Chile because of poor form.

Ter Stegen produced a flying save to deny Robert Lewandowski in the second half, before Nordtveit earned two needless yellow cards.

Jojic’s goal proved to be a mere consolation after Marvin Ducksch’s 88th-minute goal was ruled out for a Lewandowski foul on Ter Stegen.

Hoffenheim midfielder Sead Salihovic missed a second-minute penalty but his side went ahead with fine goals from Eugen Polanski against his former club in the 49th, and Roberto Firmino four minutes later.

The home side’s defense crumbled, however, after Eric Maxim Choupo-Moting pulled one back in the 67th. Benedikt Saller equalized in the 73rd, Shinji Okazaki scored two minutes after that and claimed his second in injury time.

“I can’t explain why we gave the game away,” Hoffenheim coach Markus Gisdol said.

It had been briefly interrupted in the first half when Hoffenheim’s Andreas Beck crashed into a pitchside cameraman, knocking him and the TV camera over. Both needed treatment. The cameraman was carried away on a stretcher, while Beck carried on.

With new coach Huub Stevens in charge, Stuttgart was hoping to end its nine-game winless streak. The Dutchman’s previous Bundesliga win was at Bremen in 2012 with former side Schalke.

Stuttgart striker Martin Harnik should have scored before the break but missed his penalty against his former side.

Georg Niedermeier put the visitors ahead in the 55th, only for Bremen captain Aaron Hunt to equalize with a free kick in the 78th.

“A pity that we couldn’t seal the deal,” Stevens said. “I can be happy with the way our game went but not with the result. We should have been rewarded.”

Lars Stindl scored for Hannover four minutes after the break, Jan Schlaudraff rounded the keeper for 2-0 in the 57th, and Szabolcs Huszti completed a miserable afternoon for Hertha in injury time.

“Hannover deserved to win yet weren’t the better team,” Hertha coach Jos Luhukay said. “We had more chances but didn’t use them.”

Wolfsburg took the lead in Braunschweig through Luiz Gustavo in the 36th, but Karim Bellarabi kept his side’s hopes of avoiding the drop alive by converting Domi Kumbela’s cross three minutes after the break.

“This draw lets us continue on our journey of Bundesliga participation,” Braunschweig coach Torsten Lieberknecht said.