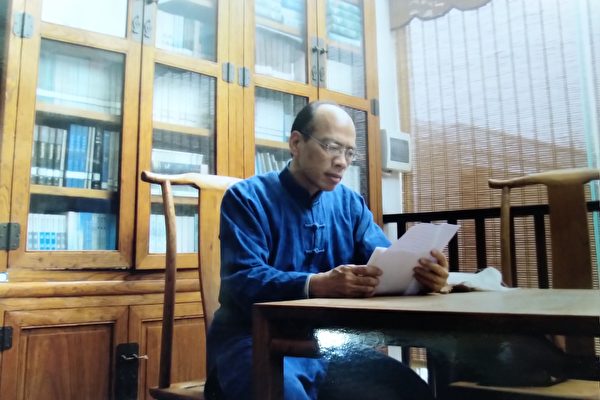 A Taiwanese scholar has shared his experience being monitored by the Chinese Communist Party (CCP) when he was a university professor in China and why he chose to flee China in his unpublished anthology “Twenty Years of Sleep—Awakening from the Chinese Dream.”

Wu Mingneng studied and worked in China for 20 years, through which he has learnt the hardest lesson—never trust the CCP, he said in a recent interview with the Chinese language edition of The Epoch Times.

Wu suffers from the bipolar disorder due to the Chinese regime’s long-term surveillance. After returning to Taiwan, he was hospitalized for four years and now barely makes a living doing odd jobs with his family’s support.

Wu wants to warn other Taiwanese not to be enticed by the CCP with official titles and money, only to be trapped in the CCP’s system that will only lead to themselves and others to a tragic end.

Going to China for Further Studies in Chinese Culture

Wu always had a strong interest in Chinese culture.

Born in Taiwan, Wu earned bachelor’s and master’s degrees in Chinese. He wanted to pursue further studies in Chinese culture and went to Peking University for a doctorate in classical philology in 1994.

After graduation, he taught at Sichuan University, where he became an associate professor in the Department of History and the deputy director of the Southwest China Literature Research Center.

Turning Down the CCP’s Offers Upset the Regime

During his stay in China, Wu turned down the CCP’s offers of membership in the Political Consultative Conference three times, which upset the CCP.

On several other occasions, although he was careful, his words were considered by the CCP to have crossed its red line.

For example, the party secretary at the academy repeatedly warned Wu, “When you offer lectures on Chiang Kai-shek’s diaries, you cannot use such an expression ‘the mainland has fallen and Chiang handed it over to the Communist Party.’” The CCP touts in Chinese textbooks that it “defeated Chiang Kai-shek and liberated China.”

Similar incidents continued to occur to Wu, but it was his remarks at a Nanjing seminar in April 2013 that triggered the CCP’s direct suppression of Wu.

The Nanjing seminar was themed with the “Liberalism” advocated by Hu Shih, a leading scholar of modern China and Chinese ambassador to the United States from 1938 to 1942.

Wu believed that the theme was closely related to the national economy and people’s livelihood, so he criticized China’s current affairs and Chinese officials. But he carefully mentioned the prices of food instead of the regime’s communist system of governance as the target of his criticism.

“The authorities don’t care about the national economy and people’s livelihood. In Sichuan, the price of pork ribs has tripled in two months, as have vegetables and fruits, but wages have not risen. Inflation has made people’s lives difficult. We should bring up the issue as conscientious academics. Hu Shih walks out of the ivory tower to have an understanding of what is important for people when talking about liberalism,” Wu said at the time.

The audience fell into dead silence after Wu’s remarks.

On his flight back to Chengdu, there were tough-looking men sitting on either side of Wu.

They took the initiative to talk to Wu during the flight, and what they said revealed that they knew Wu’s background well. They also warned him, “Be mindful about what you say, or you will bear the consequences.”

After returning to Sichuan, he was kept under surveillance at all times, including his residence and classrooms.

When back at the Chengdu campus, Wu found, all of a sudden, that many people were always standing around him and following him wherever he went. There were also people watching him from across the road from his residence. Later, a camera was installed in his classroom to record his teaching.

Wu could do nothing but report the situation to the CCP secretary of the history department. The secretary said that these people were from the national security system and of higher rank than people in the education system. He told Wu that he could do nothing about it.

He took off his shirt and smeared ink on his body in public, protesting against the security personnel’s interference in his calligraphy teaching. He tried to threaten them to leave by biting his tongue off. The incident ended only after Sichuan University promised Wu that it would settle accounts with him.

However, the university failed to deliver on its promise and expelled him. Fearing arrest, Wu fled back to Taiwan, leaving his wife and young daughter in Sichuan.

The mental trauma of his time in China has left mental scars on Wu, even in the safe environment of Taiwan. Sadly, his mental condition has not improved, although he was eventually discharged from the hospital after four years of treatment.

He has come to understand that, even after his staying in China for twenty years and knowing the CCP’s red line, the CCP cannot tolerate him.

Twenty years in China were like a bad dream to Wu, who now says he has woken up.

Lee Se-hoon contributed to the article.