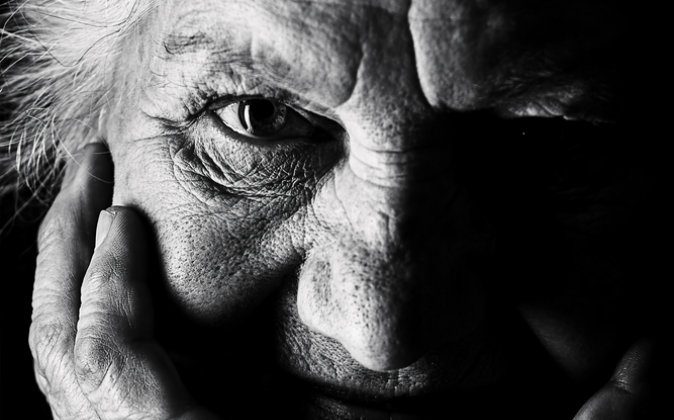 An old woman sat with some youth in a fast-food restaurant. What she said to them left them in hysterics. (Shutterstock*)
Beyond Science

Have you ever had a paranormal experience? The following experiences were shared by users on Reddit and Quora. Though they’re creepy all throughout, sometimes the really shocking part of the story is at the very end.

In early 2007, I was in a traveling singing group. … We were invited to stay the evening at the house of a previous member named Drew. …

At 2:48am (I’ll never forget the clock, since it was the only thing I could focus on) I woke up very suddenly. I was immediately frozen in bed, my heart was racing, my throat went tight and I couldn’t swallow. It was primal fear at its best.

I couldn’t roll over to check, but I swear, even now, that something was standing over me. Everything in my instinct told me not to turn around. It felt like my life depended on me staying right where I was. During this time of intense fear, I kept seeing images in my mind, flashes of gore and plain-out horrible things.

I could hear a laughing in my ears, but not the voice of just one person laughing. It sounded like I was in a room with thousands of …things …laughing. I remember for the first time having suicide cross my mind during this overwhelming, fear-driven time.

I should note that I am not, and have never been, suicidal.

When “the feeling” went away, the last thing I remember hearing in my mind was, “Not this one.” I looked at the clock again and only nine minutes had passed. Longest … nine minutes of my life.

A few hours later when I got up, I decided I was going to get … out of there as quickly as I possibly could. I skipped a shower and breakfast and sat in the van waiting for the rest of my team.

As I was waiting, Drew’s brother came out and spoke with me. He said one sentence: “I’m sorry I couldn’t help you this morning.” As he said it, he had tears in his eyes. He honestly looked like he was going to be sick to me. The look of hopelessness in his eyes still haunts me.

Two weeks later, we got word that Drew’s brother killed himself just before 3 a.m.

… Part of me wonders if I would have just tried talking to his brother, maybe things would be different.

I’ve never spoke about this to anyone but my husband. It brings back a chill to my spine … and a sense of guilt. I don’t know what to make of it or what … really happened in that house. Part of me never wants to know.

Image of a scared girl via Shutterstock

Growing up, I used to spend the night at a house that was (in my opinion) haunted. My friend lived there with her family, and they all thought nothing of the sinks turning themselves on and off at night, sporadically. … Other haunted [happenings] … in this house:

Image of light bulbs via Shutterstock

3. The Lady at McDonald’s

I will start this story by saying I am a skeptic. I don’t believe anything I haven’t seen a scientific explanation for … However, even though the episode I am about to relate happened over 25 years ago, it is still very clear in my memory.

I was 18 at the time, and I had recently acquired a full driving licence. I had borrowed my father’s car and … we drove to a nearby town in search of a snack. Being fairly late on a Sunday, the town was deserted and the only place open was McDonalds. …

We had only just sat down when an elderly woman appeared at the table next to us. She was neither smart nor scruffy—she did not look homeless, but her clothes seemed somewhat old and worn. She immediately engaged us all in conversation, which started off innocent and friendly, but rapidly became quite personal.

The woman seemed to know an awful lot about us, even though none of us had ever seen her before and we didn’t really know anyone in this town. She was alert and animated and spoke quickly, singling out people from the group in turn and discussing specific details of their lives she had no possible way of knowing.

Early in the exchange she turned to me and said “Of course, your grandfather was an engineer, wasn’t he?” He was an engineer, but he died in 1951 and had never lived in the area, so she could not have known him.

My friends were laughing along with her at first, but went quiet one by one as she delivered more and more details that could not be determined by simple cold-reading. … Unlike a fairground fortune-teller, her statements were very specific and she dominated the conversation in a way that someone mining for information would not.

She spontaneously started speaking in French to one of my female friends who understood the language. … She started to re-assure people about very specific concerns they had but had not discussed and offered advice, making occasional references to various deceased relatives.

By this time, my female friends were visibly upset and my male friends … were dumbstruck. The woman stood and announced that she must go, as she was disturbing us. She headed for the door and, as it was now late and the staff were looking like they they wanted to go home, we stood up and followed her out of the restaurant.

And here is the punchline. I was no more than a few paces behind her as she went through the first of the two doors leading onto the street. The exit was on the corner of the building and opened onto the intersection of two shopping streets. There were no other doorways, alleyways, or streets that could conceal anyone near the exit, but when I got outside, the woman had disappeared.

We had a fifteen minute journey home in the car and there were floods of tear—everyone was hysterical. I guess you had to be there, but it was scary in a deeply unsettling way.

When the house we live in today was for sale, we went with our realtor for a tour. The 80+ year old lady who lived there at the time was there. She stayed in the corner bedroom on a bed and read a book while we looked around.

After we left, my wife and I thought it was strange that she hung out in that room and not the master bedroom, that the bed in the master didn’t look like it had been slept in in a while, and that the master bath had clearly not been used in a long time. Once we bought the house, the neighbor told us that the old lady didn’t like to spend any time in the master suite anymore, because that’s where her husband, Ray, had died.

Fast forward a few years. My wife is out for the day, so it’s just me, our 3-year old, and our baby at the house. After putting the baby down for a nap I asked the 3-year-old to hang out in the bedroom while I got a quick shower. He had gotten one of these toys a few days before but had been having a lot of trouble figuring it out.

… When I was in the shower I thought I heard him talking to someone—maybe my wife had come home early—but when I got out, it was still just me and him. … He was sitting on the bed, proficiently working the gyro toy. I told my kid I was happy he figured it out and he replied, “Oh it’s easy now that Grandpa Ray showed me how it works.”

Image of an elderly man with a little boy via Shutterstock