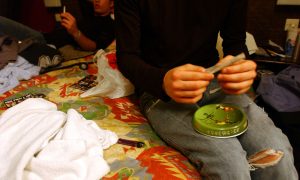 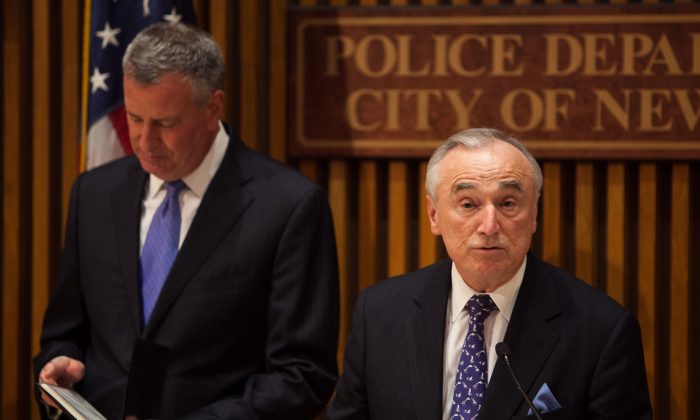 Despite Shift to Tickets, Risk of Arrests Continues
By Petr Svab
biggersmaller
Print

NEW YORK—The bottom line is marijuana is illegal. But the police will no longer push to ruin people’s lives over it, Mayor Bill de Blasio and Police Department Commissioner William Bratton explained at a Monday press conference announcing the new policy to issue court summonses, rather than make arrests for marijuana possession.

While running for mayor, de Blasio criticized the current policy that results in tens of thousands being arrested and tagged with a misdemeanor charge for the rest of their lives.

Starting Nov. 19, officers will be instructed to issue summonses instead of arresting. If the person shows up in court on time, a judge will issue a ticket of up to $100 for the first offense, up to $250 for a repeated offense. No arrest, no fingerprints, no mug shots, no permanent record.

“Particularly with our young people, who may make a mistake from time to time, that mistake will not have as negative of an impact on their future,” the mayor said.

There are major caveats though.

The summonses only apply to “pubic display” of a “small amount” of marijuana (under 25 grams). Having a small amount of marijuana hidden in one’s pocket has been just a violation for decades already.

On the other hand, smoking marijuana will still be a reason for arrest under the new policy.

Also, if one is under active investigation, arrest warrant, or doesn’t have identification, the “public display” will still result in arrest.

De Blasio also said officers will have discretion to make arrests in suspicious circumstances, such as when they suspect an attempt to sell the drug, or around schools and playgrounds.

Even after repeated questions Bratton and de Blasio didn’t specify how such discretion would be handled.

There have been over 24,000 arrests for marijuana possession so far this year, a drop of three percent since last year, Bratton said. He couldn’t say though how many of those were for “public display” and how many for smoking.

Minority advocates have been complaining for years about blacks and Latinos being singled out for marijuana arrests.

While in the first eight months of this year under Mayor Bill de Blasio’s watch, a report by the Drug Policy Alliance of New York showed 86 percent of arrests for marijuana possession were blacks and Latinos, but young whites use marijuana at higher rates than young blacks and Latinos.

Shifting part of the arrests to summonses won’t help to solve the disparity, said Kassandra Frederique, policy manager with the Drug Policy Alliance, a non-profit advocating for more help and less criminalization of drug users.

But Bratton said a lot of the arrests are in response to 911 and 311 calls the police get from people complaining about marijuana users. The city got over 29,000 such calls this year. The vast majority came from low-income and high-minority neighborhoods, Bratton said pointing out “they’re entitled to police service as much as anybody else.”

“One of the ways to avoid summonses is: Don’t do it. That simple. Don’t smoke it, don’t carry it, don’t use it. It’s still against the law,” Bratton said. “I’m not giving get-out-of-jail-free cards.”

Both de Blasio and Bratton reiterated they don’t want the drug legalized. At least not anytime soon.