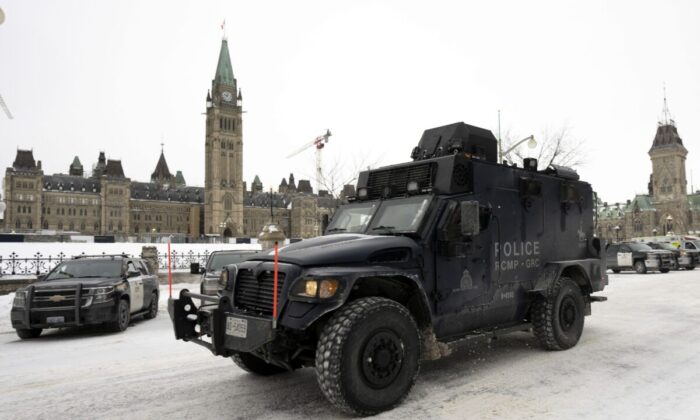 An RCMP tactical vehicle drives past the Parliament Buildings in Ottawa on Feb. 20, 2022, after a massive police operation quelled the Freedom Convoy protest. (The Canadian Press/Adrian Wyld)
Viewpoints

The people who created the Emergencies Act understood just how serious the invocation of that act could be. It is an act to be used only in the direst of circumstances when all other means of maintaining public order have been exhausted. The suspension of civil liberties can never be taken lightly or done frivolously. That is why a clause was built into the act calling for a full inquiry into its use that must be done within 60 days of its invocation.

While the Liberal government can’t prevent an inquiry from happening, they have many tools at their disposal to ensure the outcome won’t harm their electoral fortunes and they are already using them. I wish I could look forward to seeing a solid, intensive review of the government’s actions during the truckers’ Freedom Convoy protests but I don’t hold much hope of being satisfied with the outcome.

To begin with, the government literally waited until the last minute legally possible to launch the inquiry. They had until April 25 to call it and that is what they did. If they truly had any interest in self-examination, they would have called the inquiry weeks ago. They wanted to put this off as long as possible.

Next, the government appointed Justice Paul Rouleau to head the inquiry. I don’t doubt that Rouleau is a very capable judge and I do expect he will take the task seriously. Justice Rouleau was appointed to his position by a Liberal government, though, and was very active with the Liberal Party in the past. Rouleau’s Liberal connections may or may not impact his inquiry, but they surely erode the credibility of it. There are plenty of qualified justices they could have selected who had no ties to their party.

The terms of the inquiry are incomplete and are completely contrary to the spirit of the law calling for the inquiry. The commissioner is directed to do a deep dive into the protesters themselves but offers no direction on looking into the actions of the government itself. The intent of the inquiry is to determine whether the government was justified in invoking the Emergencies Act. The way this inquiry is set up makes it appear as if it is building the case for the invocation rather than questioning it. If the commissioner isn’t tasked with investigating all angles of the issue, including the government’s own actions, the outcome will be of negligible value.

Even if Rouleau decides to broaden the scope of the inquiry and look into the government’s actions, it doesn’t look likely he will have much success in getting answers. The Liberal government has already repeatedly invoked cabinet confidentiality in order to avoid answering questions posed by a special parliamentary committee investigating the use of the act. There can be little doubt that they can and would do the same if Rouleau tried to get testimony from cabinet members or the prime minister himself.

When asked directly about whether Rouleau will have access to cabinet documents and discussions as he conducts his inquiry, Liberal House leader Mark Holland said the government will provide as much information as possible. Hardly a statement instilling confidence in the Liberals’ appetite for transparency in this investigation.

There are many questions to be asked that will likely never be answered. Why did the government, with all its resources, rely on CBC reports that contained false information on foreign funding to make decisions? Why is the public safety minister still using debunked claims of arson to justify the invocation of the act?

Most importantly of all, why was the act needed when most of the protests had already been dismantled through the conventional application of the law? We won’t find out because Rouleau hasn’t been directed to ask that.

The report won’t be released until Feb. 20, 2023. While doing an important inquiry is time-consuming, with something this critical it could and should be done in a shorter time span. The government wants to draw this out as long as possible with the hope that the public will have lost interest by the time the investigation is finished. Unfortunately, with the short attention span of most Canadians these days, they may be right.

Hopefully, Canadians will learn what really happened behind closed doors when the government chose to invoke the most extreme measure they had in their legislative arsenal with the Emergencies Act. If we do find out though, it will be through inside leaks and possibly committee inquiries. The Rouleau inquiry will uncover little of significance. Just as it was modelled to.