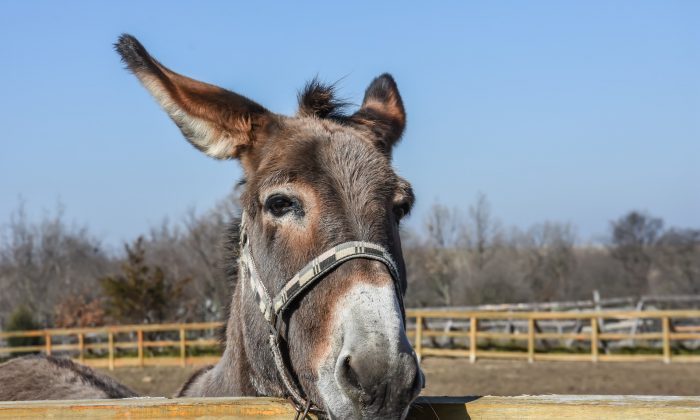 Eight donkeys have been detained by police after they ate and destroyed some rather expensive plants.

Police in the Indian state of Uttar Pradesh detained the donkeys on Nov. 24 for destroying plants worth 500,000 Indian Rupee (~$7,750) outside of Urai district jail.

Jalaun(UP): Police release a herd of donkeys from Urai district jail. They had been detained for destroying plants outside jail and were released after four days pic.twitter.com/Wl5UJrU2tT

“These donkeys had destroyed some very expensive plants which our senior officer had arranged for planting inside jail and despite warnings the owner let loose his animals here so we detained the donkeys,” said Urai jail head constable RK Mishra, according to Asian News International.

These donkeys had destroyed some very expensive plants which our senior officer had arranged for planting inside jail and despite warnings the owner let loose his animals here so we detained the donkeys: RK Mishra,Head Constable, Urai Jail pic.twitter.com/TnQgcO650F

Owners searched for the donkeys until one of the owners, identified only as Kamlesh, was informed about the detention and requested the donkeys to be released. But the officials refused him, India Today reported.

He then contacted Shakti Gahoi, local leader of the currently ruling conservative Bharatiya Janata Party. Gahoi accompanied Kamlesh to a police station and secured the release of the donkeys on Nov. 27.

We couldn’t find another incident of donkeys getting jailed. The closest a donkey previously found itself to detention could had been in 2015 in Norman, Oklahoma, where an officer used food to lure a stray donkey into his car to get it off the road. A woman was willing to care for the donkey until its owner was found but she couldn’t fit it into her car. Police Officer Kyle Canaan agreed to give the donkey a ride.

It's not everyday that you see a donkey in the back of a police car. Ofc Canaan helped get it safely off the roadway pic.twitter.com/z6j4hajDrD

The owner of the donkey, Matt Spaulding, was eventually reunited with it, KFOR reported.

“I’m just grateful for good neighbors,” Spaulding said. “They kept him safe until I could get him back. They did a great job.”

Spaulding said the donkey, named Cruz, used to play donkey basketball, a charity game where players have to sit on donkeys to score, pass, or block.

We work hard to deliver the most important and interesting news every day for you, and we ask a little favor in return: Would you please share this story with your friends? You can just click the share button below. Thank you!